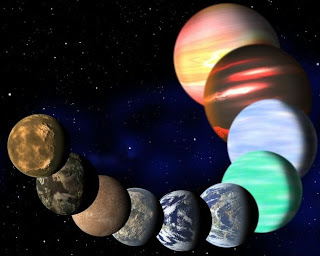 At least we now have a number. It happens to be completely huge. What is more, this is likely the minimum number of planets that can be terraformed and are likely been terraformed or have been.

In our own solar system Earth has long been effectively terraformed and is now in the process of been redone after the Pleistocene nonconformity some 13,900 years ago.

On top of that Venus was likely ejected from Jupiter quite recently and now needs to be bombarded with volatiles to cool down the crust and provide enough water and carbon. We will eventually get the job.

Otherwise subsurface colonies are plausible on the moons of Jupiter and Saturn if needed for any reason. The same technology supports subsurface establishments on Mercury, the Moon and on Mars.

In short, our solar system can be reasonably infested with life.


Astronomers say that one in six stars hosts an Earth-sized planet in a close orbit - suggesting a total of 17 billion such planets in our galaxy.

Their findings were announced at the 221st meeting of the American Astronomical Society in California.

Since its launch into orbit in 2009, Kepler has stared at a fixed part of the sky, peering at more than 150,000 stars in its field of view.

It detects the minute dip in light coming from a star if a planet passes in front of it, in what is called a transit.

But it is a tricky measurement to make, with the total light changing just tiny fractions of a percent, and not every dip in light is due to a planet.

So Francois Fressin of the Harvard-Smithsonian Center for Astrophysics - who discovered the first Earth-sized planets set about trying to find out not only which Kepler candidates might not be planets, but also which planets might not have been visible to Kepler.

"We have to correct for two things - first [the Kepler candidate list] is incomplete," he told BBC News.

"We only see the planets that are transiting their host stars, stars that happen to have a planet that is well-aligned for us to see it, and [for each of those] there are dozens that do not.

"The second major correction is in the list of candidates - there are some that are not true planets transiting their host star; they are other astrophysical configurations."

These might include, for example, binary stars, where one star orbits another, blocking some of the light as the stars transit each other.

"We simulated all the possible configurations we could think of - and we found out that they could only account for 9.5% of Kepler planets, and all the rest are bona fide planets," Dr Fressin explained.

The results suggest that 17% of stars host a planet up to 1.25 times the size of the Earth, in close orbits lasting just 85 days or fewer - much like the planet Mercury.

Even as Dr Fressin reported an analysis of the most recent Kepler catalogue, it was increased substantially by results reported by Christopher Burke of the Seti Institute.

Dr Burke announced 461 new candidate planets, a substantial fraction of which were Earth-sized or not much larger - planets that have until now been particularly difficult to detect.

"What's particularly interesting is four new planets - less than twice the size of Earth - that are potentially in the habitable zone, the location around a star where it could potentially have liquid water to sustain life," Dr Burke told BBC News.

"It's very exciting because we're really starting to pick up the sensitivity to these things in the habitable zone - we're just really getting to the frontier of potentially life-bearing planets."

William Borucki, the driving force behind and principal investigator on the Kepler mission, said he was "delighted" by the fresh batch of results.

"The most important thing is the statistics - not to find one Earth but to find 100 Earths. That's what we'll be seeing as the years go on with the Kepler mission, because it was designed to find many Earths."