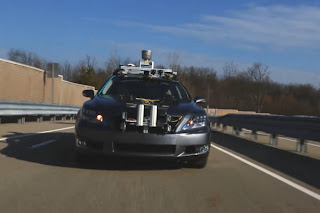 We are not there yet but the competition is clearly heating up as the majors pile on. The first obvious stage is to have an effective system that the driver simply monitors in a hands off position. This may be possible largely even now. Such a transitional will then be natural and quick as confidence also rises.

The majority of driving is repetitive and just removing that particular load will popularize its acceptance.

From that point, it should take less than a decade to see it all go driver-less to everyone's safety and ease.

From then on mankind will be simply catered to by his transport and driving skill will be surplus. Good riddance I think. It has been fun while it lasted.

Aircraft will need the same facility just because we are partially below past any decent velocity and for most of our vision globe.

Toyota and Audi competing with Google to commercialize self-driving cars

2013 Lexus LX is equipped with Toyota's Intelligent Transport Systems (ITS). ITS includes a radar and a communications system for "talking" to other vehicles.


The Christian Science Monitor has a preview report from the 2013 Consumer Electronics Show. Toyota and Audi are both preparing to show off cars with driverless technology at the 2013 Consumer Electronics Show. Google has been working on driverless cars for years, and big automakers like Toyota and Audi are getting serious about the technology as well.


The Wall Street Journal reports Audi will be bringing a car that can find a parking space on its own, and park itself without help from a driver. Audi’s been working on autonomous vehicle technology for quite a while, as have Ford and Mercedes-Benz.

Toyota, for example, notes in a press release that its “high-level driver assistance systems” are designed to make things safer for the driver of the vehicle and for other vehicles on the road. Lots of cars today have “adaptive cruise control,” which matches a vehicle’s speed to that of surrounding traffic. And some cars can automatically steer themselves back into a lane if the driver veers out of it by accident.


There’s no mistaking where Toyota and Audi are headed, though: with its spinning radar and communications array, the Lexus LS is aiming to be a fully autonomous vehicle that can operate safely without driver interaction. (By the way, even though Google tends to use Toyota cars in its self-driving fleet, the two companies say their driverless technologies were developed separately.)