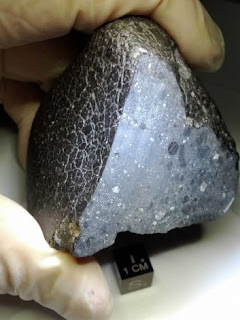 I will take it. Any sample is superior to no sample and we are developing a spectrum of samples that could not be replicated with an actual expedition to Mars. In the meantime more eyeballs are getting familiar with the necessary characteristics and the desert regions are becoming more productive.

In the meantime these are data points that help in piecing things together for our expeditions to the planet.

Most ejecta will be part of a substantial event and that likely means that a lot of material went into space at the same time. Most of this will be from impact events. The low gravity and limited atmosphere on Mars and the Moon make this practical.


Martian rock from Sahara desert unlike others

This image provided Carl Agee, University of New Mexico, shows a rock from Mars that landed in the Sahara Desert. An examination of the Martian meteorite known as NWA 7034 determined it is 2.1 billion years old and is water-rich. Photo: University Of New Mexico, Carl Agee / AP


LOS ANGELES (AP) — Scientists are abuzz about a coal-colored rock from Mars that landed in the Sahara desert: A yearlong analysis revealed it's quite different from other Martian meteorites.

Not only is it older than most, it also contains more water, tests showed. The baseball-size meteorite, estimated to be 2 billion years old, is strikingly similar to the volcanic rocks examined on the Martian surface by the NASA rovers Spirit and Opportunity, which found water-bearing minerals.

"Here we have a piece of Mars that I can hold in my hands. That's really exciting," said Carl Agee, director of the Institute of Meteoritics and curator at the University of New Mexico who led the study published online Thursday in the journal Science.

Most space rocks that fall to Earth as meteorites come from the asteroid belt, but a number can be traced to the moon and Mars.

Scientists believe an asteroid or some other large object struck Mars, dislodging rocks and sending them into space. Occasionally, some plummet through Earth's atmosphere.

Short of sending a spacecraft or astronaut to the red planet to haul back rocks, Martian meteorites are the next best thing for scientists seeking to better understand how Earth's neighbor transformed from a tropical environment to a frigid desert.

About 65 Martian rocks have been recovered on Earth, mostly in Antarctica or the Sahara. The oldest dates back 4.5 billion years to a time when Mars was warmer and wetter. About half a dozen Martian meteorites are 1.3 billion years old and the rest are 600 million years or younger.

The latest meteorite NWA 7034 — nicknamed "Black Beauty"— was donated to the University of New Mexico by an American who bought it from a Moroccan meteorite dealer last year.

Researchers performed a battery of tests on the meteorite and based on its chemical signature confirmed that it was blasted to Earth from Mars. At 2.1 billion years old, it's the second-oldest known Martian meteorite that formed from a volcanic eruption.

There's also evidence that it was altered by water. Though the amount released during heating was small — 6,000 parts per million — it was still much more than other Martian meteorites. Scientists said this suggested there was interaction with water near the surface during a time when the planet was mostly dry and dusty.

More tests are under way to determine how long the rock floated in space and how long it had been sitting in the Sahara.

University of Alberta meteorite expert Chris Herd said the find was welcome since most Martian rocks that rain on Earth tend to be younger. And the latest find does not appear to be too contaminated, he said.

"It's fairly fresh. It hasn't been subjected to a whole lot of weathering," said Herd, who had no role in the research.

http://www.sfgate.com/news/science/article/Martian-rock-from-Sahara-desert-unlike-others-4164854.php#ixzz2H21aEW00
Posted by arclein at 12:00 AM