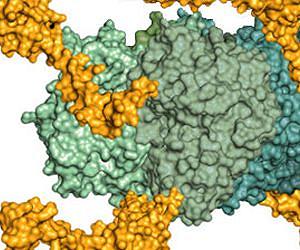 They have successfully scavenged the offending pesticide from the victim's bloodstream. This is an obvious route to exploit fully on all the other pesticides.

Most are victims due to chronic exposure, often quite accidental. After all it is handled often in agricultural circumstances. There is no .one usually there to be properly paranoid.

Agriculture is learning how to operate organically and these pesticides will go out of service. Unfortunately, that will still takes several decades.

An enzyme treatment which could neutralise the effects of lethal chemicals responsible for the deaths of hundreds of thousands of people across the world has been developed by experts at the University of Sheffield.

Organophosphorus agents (OP) are used as pesticides in developing countries and acute poisoning is common because of insufficient control, poor storage, ready availability, and inadequate education amongst farmers.

It is estimated about 200,000 people die each year across the world from OP poisoning, through occupational exposure, unintentional use and misuse, mostly in developing countries like India, Pakistan, and Sri Lanka and through deliberate terrorist activities.

OPs include compounds like Tabun, which was developed in 1936 by German scientists during World War II, Sarin, Soman, Cyclosarin, VX, and VR.

Using a modified human enzyme, scientist Professor Mike Blackburn from the University of Sheffield's Department of Molecular Biology and Biotechnology collaborated in a consultancy role with Professor Alexander Gabibov of the Shemyakin-Ovchinnikov Institute, Moscow, and Professor Patrick Masson of the Departement de Toxicologie, Centre de Recherches du Service de Sante des Armees, to create a "bioscavenger" which was found to protect mice against the nerve agent VR and showed no lasting effects.

In studies performed at the Institute of Bioorganic Chemistry in Pushchino, Russia, a total of eight mice were treated with the new enzyme after being subjected to enough of the VR agent to kill several of the animals - about 63 mg - and all survived.

Professor Blackburn said: "This current publication describes a novel method to generate a bioscavenger for the Russian VR organophosphorus agent with the key property of being long-acting in the bloodstream.

"That has been achieved by a combination of chemical surface modification (polysialylation) and biotechnology of production (through the use of an in vitro CHO-based expression system employing genes encoding butyrylcholinesterase and a proline-rich peptide under special promoter control).