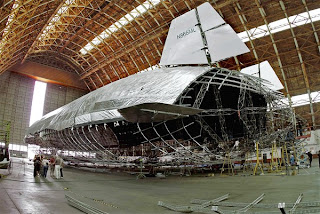 It presently weighs eighteen tons and will carry sixty tons. It is certainly a good start. What it really becomes is a learning platform for the integration of modern materials into effective airship design. While we are at it, it would also be a good idea to discover if we can also operate safely with hydrogen again.

If hydrogen could be held in chemically neutral bladders and designed to fail upward for safe release we may have something. On the very large craft, it may be practical to place helium filled bladders around the perimeter while all the interior bladders hold hydrogen. This supplies a safe crush zone in the event of a crash. Any fire will burn upward away from the craft also.

I suspect that it will be completely feasible to build craft out to two thousand tons of fully loaded dead weight with a fifteen hundred tons or more as cargo. In that case, helium supply quickly becomes a limiting factor and the hydrogen solution kicks in.

The large craft themselves will be used to haul cargo point to point and will have small crews that may even have an evacuation ultralight aircraft as well as parachutes. As a comparable to this vessel, we are ultimately going to a thousand foot length which looks pretty well possible.

What will be interesting is the operational speed that can be achieved with this new craft design and just how scalable that skin happens to be.

These guys are not the only players out there and the moment we have a deliverable and a fifty ship purchase contract from a cargo hauler, this industry will be off and running. This is the one technology able to put long haul trucking completely out of business and able to challenge seaborne container shipping simply on time value. Imagine the impact on the fruit and vegetable trade. The longest possible haul will be seven days and the real volume will be traveling vibration free less than two days.

In time we will have thousands of these craft up there.


A massive cargo-carrying airship has taken shape inside one of the 17-story wooden blimp hangars at the former military base in Tustin.

According to aircraft maker Worldwide Aeros Corp., construction is complete on a 36,000-pound blimp-like aircraft designed for the military to carry tons of cargo to remote areas around the world.

The Montebello company hopes to have a first flight in the coming months and to demonstrate cargo-carrying capability shortly thereafter.

"This is truly the beginning of a vertical global transportation solution for perhaps the next 100 years,” Chief Executive Igor Pasternak said in a statement.

Worldwide Aeros, a company of about 100 employees, built the prototype under a contract of about $35 million from the Pentagon and NASA.

The Aeroscraft is a zeppelin with a 230-foot rigid skeleton made of aluminum and carbon fiber. It's a new type of hybrid aircraft that combines airplane and airship technologies and doesn't need a long runway to take off or land because it has piston engines that allow it to move vertically and a new high-tech buoyancy control system.

Ultimately, the company wants to be able to carry up to 66 tons.

"This will land in Africa, Afghanistan," Pasternak told The Times in September, "a Wal-Mart parking lot – wherever."
Posted by arclein at 12:00 AM