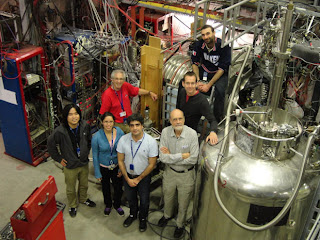 Antimatter is the interesting problem and is simply not understood at all. What it clearly proves is that particles can degenerate into photons or my preference as partially bounded curvature. Again my work nicely encompasses that but does not as yet understand the natural production of larger particles or the direct creation of an anti proton. I think it most likely that preferred neutron decay produces a hydrogen atom. A non preferred decay will produce the anti hydrogen.

The question becomes what drives preference and modeling may well reveal all that. It could be simply be that the initial act of creation set up a specific asymmetry that makes the choice automatic. There is certainly strong indication of just that happening. Again modeling will now reveal this.

Thus symmetric processes will produce anti particles but since the majority of processes are inherently asymmetric, we have the universe we see without a lot of noise.

A Canadian scientist at the forefront of research on antimatter has proposed a novel way to solve one of the field’s most daunting problems — what to keep it in.

For experimental physicists, antimatter is an elusive quarry because it will vanish in a flash of light upon contact with anything made of regular matter. But a paper published Sunday points the way to a potential solution, in which lasers will literally freeze atoms of anti-hydrogen in place so they can be studied and compared to regular atoms.

The proposal by Makoto Fujiwara, a research scientist at Canada’s particle physics lab TRIUMF and an adjunct professor at the University of Calgary, has not been tested in reality, but computer simulations he devised with an American co-author indicate that a laser-based technique called Doppler cooling could chill anti-hydrogen to just a whisker above absolute zero.

At that point, he writes in the Journal of Physics B, it might be possible for scientists to determine the precise colour and weight of the strangest stuff in existence.

Much progress has recently been made in this effort, notably by Canadians working at the ALPHA project at CERN in Geneva, including Mr. Fujiwara, who in 2011 used magnets to hold particles of anti-hydrogen stable for as long as 15 minutes, and last year made the first ever direct measurement of antimatter’s energy.

And just last month, Mr. Fujiwara’s colleagues in B.C. started to test a prototype of his laser cooling system. But antimatter remains one of the great mysteries in science, predicted in theory in 1930, discovered three years later, and still as baffling as anything in science.

Antimatter is just as it sounds, the opposite of matter, and when a particle meets its antiparticle, they both vanish in a flash of light. The big question is why there is so little antimatter around, and a surplus of regular matter.

Theory says both were created in equal parts during the Big Bang, and indeed the lingering flash of their mutual annihilation can still be detected in the universe. But for some reason regular matter eventually won out, and today antimatter is exceedingly rare. Other than in radioactive decay or cosmic ray collisions, it is not naturally produced, and man-made production is still small scale, although it is widely used in medicine for PET (positron emission tomography) scanning.

We want anti-hydrogen atoms as cold as possible in our trap, and by cold I mean not moving.

Discovering any difference between hydrogen and antihydrogen, therefore, might mean discovering the reason why there is any stuff at all, and why the universe is not just a big flash of light with nothing left over. On the other hand, proving that antihydrogen really is the exact opposite of the regular kind would be an important foundation on which to build future experiments.

And so, with this latest theoretical proof of the laser cooling concept, the effort turns to actually building a machine that can do it.

Already, the ALPHA apparatus at CERN in Geneva is capable of trapping a cloud of antihydrogen inside a cucumber-sized cylinder surrounded by superconducting magnets and silicon detectors. The next step is to cool it.

“We want anti-hydrogen atoms as cold as possible in our trap, and by cold I mean not moving. In particular, to measure the gravitational properties, antihydrogen in our trap is still moving way too fast. So this paper has shown that the technique called laser cooling can be applied in our experimental set-up,” Mr. Fujiwara said.

“Nobody has ever seen antimatter falling down,” Mr. Fujiwara said.