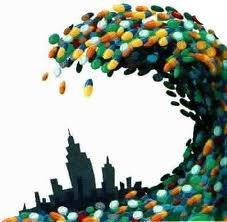 This article was recently prepared for Forbes Magazine and apparently will not run. This is no surprise. The industry is clearly attempting to outrun the lawsuits while redirecting rage to the NRA as pointed out here.

At best the science will be challenged and the challenge will lose in front of the courts just as tobacco lost. What is going to have to happen now is for defense lawyers to take the science into court to defend their mass murderer as a deliberate victim of clearly dangerous drugs. Then the publicity bandwagon will start to counter the gross abuse now obviously underway.

It will likely turn out that some of these drugs are actually safe and remain highly useful. Yet some are dangerous as can be. Doctors need to know which are which and to also have a real handle on known side effects in order to judge the patient's susceptibility.

Perhaps we need a class action suit of all victims of an act of violence associated with these drugs launched. It would certainly allow data to be assembled and the true scope of the problem to emerge and be counted.

Way more important. Anyone using these drugs and their entire household should automatically be fully disarmed forthwith as part of any gun management legislation. It is clearly necessary. We do not understand enough to guarantee safety.


Psychiatric Drugs, Not A Lack Of Gun Control, Are The Common Denominator In Murderous Violence


In 2000, New York legislators recognized the ubiquitous and unambiguous connection between violence, especially gun violence and mass murder, and the widespread prescribed use of psychiatric drugs. Senate Bill 7035 was introduced in the New York State Senate that year requiring police agencies to report to the Department of Criminal Justice Services (DCJS) on certain crimes and suicides committed by a person who is using psychiatric drugs, including assault, homicide, sex offenses, robbery offenses, firearms and other dangerous weapons offenses, kidnapping and arson. The preamble to the bill read, in part:

There is a large body of scientific research establishing a connection between violence and suicide and the use of psychotropic drugs in some cases. This research, which has been published in peer reviewed publications such as the American Journal of Psychiatry, The Journal of the American Academy of Child and Adolescent Psychiatry, and The Journal of Forensic Science, has shown, among other things, that: certain drugs can induce mania (a psychosis which can produce bizarre, grandiose and highly elaborated destructive plans, including mass murder);. . .and certain drugs can produce an acute psychotic reaction in an individual not previously psychotic.

The bill died in committee. Since that time, there have been at least 12 additional high-profile mass murders linked to the use of psychiatric drugs, about one a year. And, in virtually every mass school shooting during the past 15 years, the shooter has been on or in withdrawal from psychiatric drugs. Here is a partial list of 24 such horrific events that occurred since 1998, not including the Virginia Tech shootings and the recent Sandy Hook shootings where the authorities continue to suppress information about whether and to what extent the shooters were on or in withdrawal from a psychiatric drug.

These examples are not unique. According to the Citizens Commission On Human Rights International (CCHR), between 2004 and 2011, there were 12,755 reports to the U.S. FDA’s MedWatch system of psychiatric drugs causing violent side effects including: 1,231 cases of homicidal ideation/homicide, 2,795 cases of mania and 7,250 cases of aggression. Since the FDA admits that only one to ten percent of all side effects are ever reported to it, the actual occurrence of violent side effects from psychiatric drugs is certainly nine or ten times higher than the official data suggest.

Yet, federal and state governments continue to ignore the connection between psychiatric drugs and murderous violence, preferring instead to exploit these tragedies in an oppressive and unconstitutional power grab to snatch guns away from innocent, law-abiding people who are guaranteed by the U.S. Constitution the right to own and bear arms to deter government tyranny and to use firearms in self defense against any miscreant who would do them harm. Therefore, it is pharmaceutical makers, not law-abiding gun owners or gun manufacturers, who should be held to account for the series of “lone-wolf,” mass shootings that have occurred since the widespread use of psychiatric drugs began.

Although it is doubtful any single variable can explain what causes someone to commit such unspeakable acts as we saw recently at Sandy Hook, one common denominator surfaces time and time again, in hundreds and hundreds of cases where a “lone wolf” commits violence, murder and mayhem for apparently no reason: Prescribed psychiatric drugs, which are well documented to induce mania, psychosis, violence, suicide and murder, including mass murder for no apparent reason by otherwise non-psychotic people.

Given the mass of supporting data linking psychiatric drug use/withdrawal and violence, and given the fact it has been ignored studiously by the U.S. Congress and federal agencies, it is well past time that Congress and state legislatures and government agencies at all levels formally investigate the well established link between prescribed use of psychiatric drugs, school shootings and similar acts of senseless violence.

As psychiatrist Peter Breggin observes in the video:

“One of the things in the past that we’ve known about depression is that it very, very rarely leads to violence. It’s only been since the advent of these new SSRI drugs that we’ve had murderers even mass murders taking these antidepressant drugs.”

Instead of intimidating the NRA into negotiating away Americans’ Second Amendment rights through its seat at the table in Washington, the government should be demanding answers and explanations from PhRMA and the pharmaceutical companies.

Instead of extorting NRA chairman Dave Keene and NRA president Wayne LaPierre into participating with the gun snatchers’ efforts to nullify the Second Amendment in the name of reducing gun violence, why aren’t the White House and Congress putting former Business Roundtable President and current head of PhRMA, John Castellani, along with the presidents of the pharmaceutical companies on the hot seat?

Why isn’t Castellani sitting in on White House and congressional meetings about the connection between his products and mass shootings instead of Keene and LaPierre of the NRA?

Why isn’t there a White House Task Force on the connection between psychiatric drugs and violence, suicide and murder, both gun related and otherwise?

Why aren’t there congressional hearings on the connection between violence and psychiatric drugs?

Why aren’t there bills being introduced in Congress and state legislatures to tighten down on the indiscriminate, unmonitored use of these killer drugs?

Why is the government still suppressing information about the shooters’ psychiatric drug use at Sandy Hook and Virginia Tech?

Why is the government turning America into a police state in the name of protecting us against nonexistent “reefer madness” while it turns a blind eye to the real, deadly med madness created by psychiatric drugs and the uncontrollable violent rages they produce in some people?

Could it be there is a quiet conspiracy afoot among pharmaceutical companies, the government and the gun grabbers to make Mr. and Mrs. Gun Owner of America the patsies for the violence and to blame lone-wolf violence on guns rather than psychiatric drugs?

Could it be that power-hungry politicians and gun snatchers are out to exploit rare tragedies such as Sandy Hook and use the blood of innocent children to scare America into giving up its constitutional rights to own and bear arms and use them as a deterrent against tyranny?

Could it be that big pharma is today’s big tobacco?

Could it be there is an intentional effort underway in the centers of power in Washington, DC to hide the truth from the American people about the strong connection between psychiatric drugs and violence and to protect the pharmaceutical companies from civil and criminal charges for their responsibility in these heinous crimes?

Could it be the Gun Control movement is simply a blind; just an effort by the triple alliance of left-fascists, big-government politicians and big-pharma prescription-drug dealers to dose and oppress the American people in the name of public safety, “officer safety” and social order?

The gun snatchers such as Sen. Dianne Feinstein, New York Governor Andrew Cuomo and New York City Mayor Michael Bloomberg all shamefully exploit the bloody murder of children as a pretext to nullify the Second Amendment and short arm the American public with their so-called “assault-weapons” ban and ammunition/clip restrictions. The fact is, the kinds of guns used by mass shooters are far less relevant than the kinds of drugs they were prescribed.

Could it be the Gun Control movement is simply a blind; just an effort by the triple alliance of left-fascists, big-government politicians and big-pharma prescription-drug dealers to dose and oppress the American people in the name of public safety, “officer safety” and social order?

The gun snatchers such as Sen. Dianne Feinstein, New York Governor Andrew Cuomo and New York City Mayor Michael Bloomberg all shamefully exploit the bloody murder of children as a pretext to nullify the Second Amendment and short arm the American public with their so-called “assault-weapons” ban and ammunition/clip restrictions. The fact is, the kinds of guns used by mass shooters are far less relevant than the kinds of drugs they were prescribed.

original taken down and scrubbed;


it is a genuine post and having very good description....
India's No 1 Local Search Engine