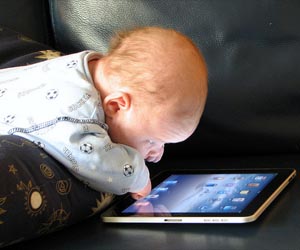 Well maybe and maybe not. The problem is that we are inept at optimizing the child's experience so that he is rewarded for improving his brain functionality. The bad news is that I think it can be done and really be beneficial also. The brain has a number of functionalities that need to be worked in order for them to be optimized. The best time to start is always as soon as possible.

It is not the tablet but the promise of the tablet that now clearly has the horsepower to manage robotic toys and soon will. We will likely have to develop new toy concepts to properly exploit all this. What is really happening is that the toy industry is smelling the first winds of serious competition and like everyone else will find it difficult to make the adjustment.

And yes, a much better 'educated child will soon be going up market sooner except we do not know what has happened to the sales curve of later toys already so impacted. Possibly little will happen as there is never an end to doting parents.


A U.S. toy industry analyst says toymakers Mattel and Hasbro are "terrified" of children turning away from traditional toys toward tablet computers.

Sean McGowan, managing director of equity research at investment banking firm Needham & Company, said children as young as 3 years old are receiving tablets such as iPads and Kindle Fires for Christmas this year, instead of Barbie and other traditional playthings, The Financial Times reported Tuesday.

"The top two guys, Mattel and Hasbro, they are terrified," McGowan said. "They should be terrified, but the official party line is they're not terrified."

Hasbro officials said the company is working to catch up to the tech-savvy youngsters.

"Clearly, young people have an aptitude for and expectation with digital platforms that we need to recognize," said John Frascotti, chief marketing officer for Hasbro.

Frascotti said one of the company's attempts to recognize the importance of digital media is the reinvention of popular 1990s toy Furby, which now comes with a free mobile app used to "feed" the toy and translate its language, "Furbish," into English.