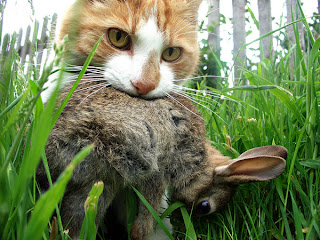 We have been seriously underestimating the damage inflicted by wild cats. On the other hand, mice are an easy meal for a cat and that is surely the bulk of the diet. Yet one does need to know just were these numbers actually come from.

My own experience with wild and tame cats inform me that females do not enjoy the wild and tend to come in from the cold with their litter. Thus it is the surviving males that run wild. Their numbers are actually small and now smaller yet because of the contraction of fertile tame females through neutering.

Cats themselves have serious enemies in the wild that make the claim of a huge population rather suspect. For the female, she has the additional risk of encountering a strange male who will kill her kits. That is why they are adapted to human protection in the first place.

So unless cat behavior shifts strongly in the wild in ways I have not observed. These numbers may simply be quite wrong. Perhaps it is time we rigged up a wild cat with the appropriate camera gear to see just what it does. A real country cat count would be nice also. How is another matter. I never did see one in the wilds around our farm and we knew it was there because it came by over several years whenever the female we kept went into heat.


Cats may kill up to 3.7 billion birds and 20.7 billion mammals in the United States alone each year, a new study has found.

That means predatory felines are likely the leading human-linked cause of death for birds and mammals, surpassing habitat destruction, collisions with structures such as buildings, and pesticide poisoning, reports an article published Tuesday in the journal Nature Communications.

"The magnitude of wildlife mortality caused by cats that we report here far exceeds all prior estimates," said the paper co-authored by three U.S. Scientists.

The researchers warned that very large numbers of birds and mammals are likely being killed "in all parts of the world where free-ranging cats occur," not just the United States.

According to the paper, cats were previously thought to be a "negligible" cause of mortality for birds and mammals compared to other human-linked threats, and that is one of the reasons why policies to deal with stray cats often involve neutering them and then returning them to their hunting grounds.

The study, led by Scott Loss at the Migratory Bird Center of the Smithsonian Conservation Biology Institute at the National Zoological Park in Washington, D.C., combined and analyzed data from as many other studies as the researchers could find about cats preying on birds and mammals in North America.

Although the estimates of the feral cat population and the average kills per cat varied widely among the studies, Loss and his colleagues were able to say that U.S. cats fell 1.4 to 3.7 billion birds a year — a huge number considering that the entire population of North American land birds is estimated to be just 10 to 20 billion.

As for mammals, cats were estimated to kill 6.9 to 20.7 billion per year. For comparison, the human population worldwide is seven billion.

The study found that a large majority of the birds and animals killed by cats were native species.

Cats without owners are blamed for most of the deaths. There are about 30 million to 80 million such feral cats in the U.S., each of which can kill upwards of 200 mammals a year alone, the study reported.
However, pet cats were far from innocent, causing 258 million to 1.5 billion of the bird deaths and 571 million to 2.5 billion of the mammal deaths.

The paper advocated taking measures such as limiting or preventing cats' access to the outdoors.

Like the global warming beatup, these are just statistics for drama queens.

We've bred cats for many years, always had at least four to 8 at home, and they roam free in the bush at the edge of the suburbs.

They bring game home, either dead or alive, depending on what it is. Birds come home alve, as do mice, but rats are always dead.

They will take a mouse a day or more in autumn, but will be lucky to get a bird every couple of months.

I am not sold either. I grew up with a handful of completely wild barn cats who kept the mice under control but could not be touched. The females stayed put and the males disappeared into the woods.

and birds do not make it easy to be caught. one or two a month is just about right.

I also think the wild numbers quoted are way too high. There are some real enemies out there quite able to handle a cat and that includes dogs on farmland to say nothing of the local foxes and coyote.