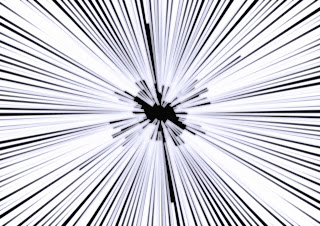 All good fun and likely all nonsense. I suspect that FTL travel is possible only using worm hole concepts and that should be safe enough provided one moves to low curvature points to avoid instantaneous acceleration been applied. I am sure there will be other tricky issues as well once the core technology is mastered.

In that scenario, the view would merely change completely. It is likely also that actual movement will be in short hops to have line of sight of any close by objects and it may be more energy efficient.

Warp drive remains a concept unlikely to be competitive with an effective worm hole strategy in the end which I suspect to be practical as more conforming evidence washes up.


The science fiction vision of stars flashing by as streaks when spaceships travel faster than light isn't what the scene would actually look like, a team of physics students says.

Instead, the view out the windows of a vehicle traveling through hyperspace would be more like a centralized bright glow, calculations show.

The finding contradicts the familiar images of stretched out starlight streaking past the windows of the Millennium Falcon in "Star Wars" and the Starship Enterprise in "Star Trek." In those films and television series, as spaceships engage warp drive or hyperdrive and approach the speed of light, stars morph from points of light to long streaks that stretch out past the ship.

But passengers on the Millennium Falcon or the Enterprise actually wouldn't be able to see stars at all when traveling that fast, found a group of physics Masters students at England's University of Leicester. Rather, a phenomenon called the Doppler Effect, which affects the wavelength of radiation from moving sources, would cause stars' light to shift out of the visible spectrum and into the X-ray range, where human eyes wouldn't be able to see it, the students found.

"The resultant effects we worked out were based on Einstein's theory of Special Relativity, so while we may not be used to them in our daily lives, Han Solo and his crew should certainly understand its implications," Leicester student Joshua Argyle said in a statement.

The Doppler Effect is the reason why an ambulance's siren sounds higher pitched when it's coming at you compared to when it's moving away — the sound's frequency becomes higher, making its wavelength shorter, and changing its pitch.

The same thing would happen to the light of stars when a spaceship began to move toward them at significant speed. And other light, such as the pervasive glow of the universe called the cosmic microwave background radiation, which is left over from the Big Bang, would be shifted out of the microwave range and into the visible spectrum, the students found.

"If the Millennium Falcon existed and really could travel that fast, sunglasses would certainly be advisable," said research team member Riley Connors. "On top of this, the ship would need something to protect the crew from harmful X-ray radiation."

The increased X-ray radiation from shifted starlight would even push back on a spaceship traveling in hyperdrive, the team found, slowing down the vehicle with a pressure similar to the force felt at the bottom of the Pacific Ocean. In fact, such a spacecraft would need to carry extra energy reserves to counter this pressure and press ahead.

Whether the scientific reality of these effects will be taken into consideration on future Star Wars films is still an open question.

"Perhaps Disney should take the physical implications of such high speed travel into account in their forthcoming films," said team member Katie Dexter.

Connors, Dexter, Argyle, and fourth team member Cameron Scoular published their findings in this year's issue of the University of Leicester's Journal of Physics Special Topics.

Editor's Note: This article was updated to correct the following error: As an ambulance moves closer to an observer, its wavelength becomes shorter, not longer.

Earth's atmosphere functions as a magnifier for terrestrial observing occupants to the entire universe. Once past the outer limits of Earth's atmosphere, a human cannot see any stars but just black space. So the occupants of an object accelerating below warp drive could not see stars therefore they also could not see stars when accelerating to warp speed. As soon as I was made aware of atmospheric magnifying scientific fact, the Hollywood productions that include NASA's Apollo program transform into nothing more than fantasy in one's higher consciousness.

to SpiralFree.... This has become my new favorite space photo! Look closely into the windows of the Cupola on the International Space Station: That’s astronaut Ron Garan, on September 16, 2011, his last day on board the space station. “That’s me in the cupola of the International Space Station off the coast of Australia taking my last of over 25,000 pics that I still want to share with everyone,” Garan wrote on his Google+ page. Not only are the colors and view spectacular, but this has got to be one of the best destination photos ever — not to mention a priceless keepsake and memento for Garan from his expedition on the ISS.