SSRIs and Linkage With Mass Shootings 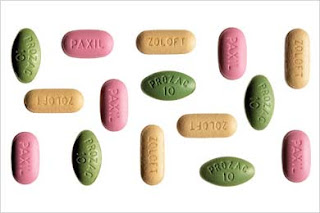 Let me see. We have 5000 linked events in which the spate of mass killings fit nicely in the third standard deviation in terms of a cause and effect relationship. If I recall correctly, alcohol abuse will likely also fit nicely into such a scenario except as it takes much longer and the effect is much weaker. It could well be that SSRI accelerates the effect.

Another aspect of SSRI's that has not gained any coverage is that some side effects are persistent long after discontinuance. I am bringing this little morsel up for those who have been exposed to these drugs and are then dealing with new apparently unrelated issues. The general effect became apparent from reports of sexual issues arising that allowed measurement. Needless to say no-one is studying any of this.

As an aside, I suggest that Vioxx victims would represent an excellent population to investigate as to a spectrum of persistent side effects.

What is badly needed is comparison work with populations from before these meds showed up ( pre 1988 ) and particularly with soldiers who certainly faced similar conditions. Vietnam veteran appears to be the obvious choice.


It is no secret that prescription drugs, notably antidepressants, can make psychiatric patients worse, not better and even precipitate violence. SSRI antidepressants like Prozac, Zoloft and Paxil are so linked to violence, they were given the FDA’s highest warning in 2004, a black box, for the suicidal risks they can create in young adults.

According to published reports, the gunmen involved in the Columbine High School, Red Lake reservation, Northern Illinois University and Virginia Tech mass shootings were under the influence of psychiatric drugs or withdrawing from such drugs. At least 5,000 other news stories, including school shootings, link psychiatric drugs to violent crime on the web site SSRI Stories.

Three men in their 70′s and 80′s attack their wives with hammers while under the influence of psychiatric drugs say news reports on the site. A 54-year-old respiratory patient with a breathing tube and an oxygen tank and no previous criminal record holds up a bank. An enraged man in Australia chases his mailman and threats to cut his throat . . . for bringing him junk mail. A 58-year-old Amarillo man with no criminal history tries to abduct three people and an Oklahoma woman accepts a cup of tea from an elderly nurse she’s just met--and kills her.

“The kind of energy, rage and insanity seen in a lot of crimes today was not seen before SSRIs appeared,” said Rosie Meysenburg, who co-founded SSRI Stories, in an interview shortly before her death this year.

Meysenburg is not the only one to observe the bizarre, unpredictable and inexplicable violence that has surfaced since the psychiatric drug craze began 25 years ago with Prozac. Did elderly people commit crimes so frequently in the past? Did people so frequently kill their families?

And there’s another indication that the high rates of suicide and violence are linked to prescription drugs--the high suicide rate in the military where antidepressants are widely given. In just one month, July of 2011, there were 32 suspected suicides, 21 among active duty troops and 10 among reservists. In one report, 36 percent of the troops who killed themselves had never even been deployed. That means combat stress and PTSD were not factors in the self-injurious behavior.

You don’t have to be a cynic to ask if the reason so many troops are killing themselves is, at least partially, because they are taking drugs that make them kill themselves. Nor is it overly cynical to ask if the 20 million Americans in the general population taking such drugs are behind the frequent mass shootings and family killings.

Martha Rosenberg is the author of the acclaimed expose, “Born With a Junk Food Deficiency: How Flaks, Quacks and Hacks Pimp The Public Health” (Prometheus Books, 2012).