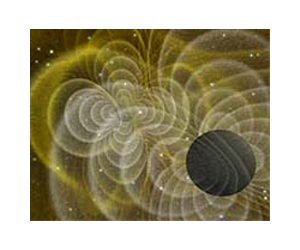 Yes, it should. Yet if matter is created, its effect on the universe is instantaneous. All good fun.

This is a delightful experiment and it nicely comes up with the right answer. Even better as we go out into to solar system, this can be replicated everywhere to great effect and will become a standard.

Thus any residual doubts about gravity been linked electromagnetic propagation can be set firmly aside.


Chinese scientists revealed Wednesday that they have found evidence supporting the hypothesis that gravity travels at the speed of light based on data gleaned from observing Earth tides.

Scientists have been trying to measure the speed of gravity for years through experiments and observations, but few have found valid methods.

By conducting six observations of total and annular solar eclipses, as well as Earth tides, a team headed by Tang Keyun, a researcher with the Institute of Geology and Geophysics under the Chinese Academy of Sciences (CAS), found that the Newtonian Earth tide formula includes a factor related to the propagation of gravity.

"Earth tide" refers to a small change in the Earth's surface caused by the gravity of the moon and sun.

Based on the data, the team, with the participation of the China Earthquake Administration and the University of the CAS, found that gravitational force released from the sun and gravitational force recorded at ground stations on Earth did not travel at the same speed, with the time difference exactly the same as the time it takes for light to travel from the sun to observation stations on Earth.

The scientists admitted that the observation stations are located near oceans, indicating that the influence of ocean tides might have been strong enough to interfere with the results.

Consequently, the team conducted separate observations of Earth tides from two stations in Tibet and Xinjiang, two inland regions that are far away from all four oceans, as well as took measures to filter out other potential disturbances.

Their findings have been published online in English by German science and technology publishing group Springer.

Printed articles in both Chinese and English will be carried in a January 2013 edition of the Chinese Science Bulletin, according to the CAS Institute of Geology and Geophysics.