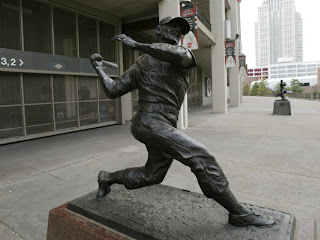 Yes it is time to recall the models of great sportsmanship and Stan Musial is up there. We have endured at least forty years of endemic doping throughout the sports industry. From 1970 onward we have had the rise of sports 'science' which once you get past the physically possible and associated training protocols is all about how to recover from training so as to repeat the process. Dope and other protocols solved that problem.

It was always possible in theory for Lance Armstrong to win seven Tour de France Races. It just was never possible in practice without rapid and perfect recovery. The body simply lacks the time to do this naturally.

I do not know if we are now seeing the end of the drug culture. I think so.
The tragedy of the past decades is that hundreds of fine athletes missed their turn in the sun and this was obvious. With Lance passing off the scene, the US is chastened and will bend its energy to ensure a level field. Canada faced the same cleansing a couple of decades ago and refocused on true excellence and with the sports industry cleaning up, has prospered.

A race to the ethical bottom traps everyone. Lance was as much a victim as everyone in cycling was a victim of this race to the bottom.

The true face of sportsmanship


Some 15 years ago, Princess Diana died in a Paris car crash and the whole world, save for the Queen, apparently went mad, confusing the death of a celebrity princess with that of a historic figure of heroic sanctity. So when Mother Teresa, an actual saint, died a few days later, it was as if God sent a gentle reminder about what authentic holiness looks like.

Perhaps similar forces were at work in the death of baseball legend Stan Musial on Saturday. All last week, the filth of Lance Armstrong’s prodigious mendacity coursed through the cable television veins of our culture. Armstrong intimated that he had to be corrupt because everyone else was corrupt. It was the approach we would expect from teenage boys behaving badly, not from someone who has been a role model to so many. So when Musial died, we remembered that his was a life that showed us what authentic manliness looked like. He was nicknamed “The Man,” and he was, just that. The real man is the virtuous man.

Stan The Man was one of the greatest baseball players of all time. He played his last game 50 years ago this September, and spent the half-century that followed as the face of the St. Louis Cardinals, never putting a foot wrong, never bringing anything but honour to the Cardinals, to St. Louis and to baseball itself.

When the archbishop of New York, Timothy Dolan, was named a cardinal last year, he was asked whether, when he was growing up in St. Louis, he had ever wanted to be a cardinal.

“Yes,” he replied. “When I was six years old, I wanted to be Stan Musial.”

Last Sunday, no longer six but in his 60s, the cardinal preached about Stan Musial on the day after his death. He still desires to be like Musial, not the ballplayer, but the faithful Christian and a good man. Or perhaps, to put it better, he desires that men looking for role models might discover Musial anew. Upon being made a cardinal, Dolan received his red hat from Pope Benedict XVI. Stan Musial sent him an autographed Cardinals’ hat. It’s the latter that greets visitors to the cardinal’s residence.

As a ballplayer, Musial became a first-ballot hall of famer after a career that included three World Series championships, 24 straight All-Star appearances, seven batting titles and three National League MVP awards. In 1963, he ranked in the all-time top 10 for hits, runs, doubles, home runs, RBIs, walks, total bases and slugging percentage. His 6,134 total bases were then a record (only Hank Aaron has passed him since 1963). His 3,630 hits are still fourth most all-time, behind only Pete Rose, Ty Cobb and Aaron.

In 1957, Sports Illustrated named him Sportsman of the Year. The accompanying profile began with an extended discussion of the nature of sportsmanship. The consensus was that whatever the definition of sportsmanship, Musial was the face of it. Former Cardinals’ manager Marty Marion said of Musial then: “Take Stan—nobody will beat you worse, but I’ve never seen him do one thing any man would be ashamed of anywhere.”


In the age of Mickey Mantle, that was an extraordinary compliment, but in today’s world, where athletes are inclined to broadcast things about themselves they ought to be ashamed of, it seems unimaginable.

Upon retirement, Life magazine profiled his last day. It began with him going to Mass in the morning, for he was a lifetime daily communicant, and while it eventually got around to the ballpark, the article focused more on Musial being a great man, rather than a great player.

He married on his 19th birthday and remained a faithful husband for 72 years. His beloved wife Lil died last spring, and it was only fitting that he would follow soon after. In 2011, he was awarded the Presidential Medal of Freedom, and it was difficult to know whether it was for his baseball career, or for being The Man for so long.

It is a great lie that virtue is not possible, or that it is not possible to be good if one wants to do well. The old man in the red blazer teaches us differently. He did well and he was good. It is possible. The Man did it.

Father Raymond J. de Souza: We should have known better about Lance Armstrong

This week, Oprah declared Lance Armstrong “certainly the biggest interview I’ve ever done.” It will air on her cable network tonight and tomorrow.

How soon she forgets. It was 20 years ago next month that Oprah actually had the biggest TV interview of all time. Broadcast live worldwide, it was Michael Jackson’s first interview in 14 years, watched by 90 million people. And while all Armstrong has to offer is cheating and 15 years of lies, Jackson discussed being beaten by his father (denied by the father), plastic surgery (denied by Michael), his rare skin disease, children’s parties at his ranch — and it was capped off with Oprah gushing over Michael doing the moonwalk. Has the queen of talk forgotten the king of pop?

Well, Jackson is deceased and so no longer available for a ratings boost. “I have a dream of OJ Simpson confessing to me,” Oprah declared in 2011 when she ended her daily show and launched her network. Alas, OJ is in a Nevada prison, so the dream will have to be deferred. In the meantime, Armstrong is the readily available crook of the moment, so: lights, camera, confession. Oprah’s network needs ratings and Armstrong needed a sympathetic ear. It’s a win-win.

The Armstrong confession is a decade late and millions of dollars short. I initially believed Armstrong’s protestations of innocence — he was never caught by the testing system, after all, as he never tired of repeating. Yet it became untenable to uphold his innocence as the years went on. So many believed the unbelievable for too long, including me, because we overlooked the importance of character.

As the evidence of widespread corruption in cycling mounted, to believe that Armstrong was clean required a belief that he was a man of heroic virtue. To win clean in a dirty era would have meant more than that Armstrong was superhumanly athletic; he would have had to be a man of superlative moral character. To compete clean when rivals are dirty is an act of moral courage and heroism, for it would mean that all of the training, all of the effort, all of the sacrifice would likely be for naught. Cheaters cheat because they are more likely to win. Only a man of preternatural integrity is able to be honest in the face of that. Few men are able to choose defeat with honour over victory by deceit, especially when worldwide fame and wealth are on offer.

Was it ever plausible that Lance Armstrong was such a man? His two autobiographies present to us a man of surpassing vanity, ruthless ambition, seething resentments, broken promises and marital inconstancy. In an honest era, surrounded by honest men, a morally weak man might be propped up by his fellows. In a dishonest era, there is no chance. A bad man might behave well under the good influence of others. Armstrong was a corrupting influence in the company of corrupt men.

The question for a dozen years has been: Did he cheat? We now know that he did. The question of character is one that would have given us an answer much earlier: Is this the kind of man who would cheat if he could get away with it? That is not sufficient for a court of law, but would have led to a more accurate public judgment.

One mark of the morally noble man is to accept criticism — especially baseless criticism — with grace and magnanimity. At the top of his game, Armstrong had neither. He was cool to his friends and vicious to his enemies. He rounded mercilessly on those who dared to tell the truth about him. He treated with contempt anyone who dared question the legend of Lance.

All is in tatters today, but not for long. Oprah will bask in the tawdry glow of it all, and then return to pining for OJ. Armstrong, having confessed to corrupting cycling, will prove a suitable government witness in the corrupt American criminal justice system. Having proved adept at telling lies for so long, he ought to be able to achieve a measure of penal leniency if he tells the lies that the prosecutors now want to hear. Lance may well prosper again, for a dishonest age honours its own.

I hope the lack of comments doesn't indicate a total absence of readers for this really wonderful page on Musial. Well done. Athletic competition is one of the best and most civilizing things in all of society and culture, when done right, and he did it right. Now we have Tiger Woods and Kobe Bryant, and apologists who tell us this is "just a different age" and "that's how athletes are" and "it's their personal life, get over it." What a toilet we've allowed ourselves to fall into.