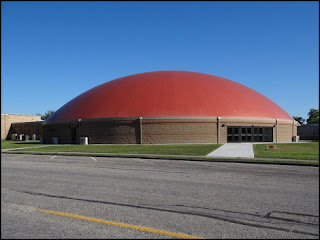 For once we have a good sense solution. The domes are there and most can stand up to the winds. Making them the focus of disaster preparedness is obvious and can be readily accommodated even in the ones already built. A little attention during design could readily expand this usage.

In time we will have a network that is both utilitarian and visible.

This model can be applied to other forms of disaster also simply because the domes are always well engineered to survive when nothing else may be. Even a flood is going to do little to concrete.

At least emergency stores such as cots and the like can be prepositioned.

There’s a lot of talk these days about the need to become more resilientand ruggedize our systems in order to better cope in a climate-changed world. It’s nice to actually see a little action on this front — in Texas, of all places.

Jay PhaganTexas’ first “hurricane dome” in Woodsboro will do double duty as a gym and a shelter. We expect it’ll look more appealing once the gale-force winds start blowing.

From the Associated Press:

Most of the time, the windowless building with the dome-shaped roof will be a typical high school gymnasium filled with cheering fans watching basketball and volleyball games.

But come hurricane season, the structure that resembles a miniature version of the famed Astrodome will double as a hurricane shelter, part of an ambitious storm-defense system that is taking shape along hundreds of miles of the Texas Gulf Coast.

Its brawny design — including double-layer cinder-block walls reinforced by heavy duty steel bars and cement piers that plunge 30 feet into the ground — should allow it to withstand winds up to 200 mph. …
[A dome now under construction in Edna, Texas,] is one of 28 such buildings planned to protect sick, elderly and special-needs residents who might be unable to evacuate ahead of a hurricane. First-responders and local leaders will also be able to take refuge in the domes, allowing them to begin recovery efforts faster after a storm has passed. … [The domes] are being erected with help from the Federal Emergency Management Agency.

Just how rugged are these things? “The builders boast Mother Nature and the big bad wolf could huff and puff together, and it wouldn’t be enough to destroy the dome,” reports Fox 26 in Houston. We assume that’s the Texan way to talk about climate change.

Lisa Hymas is senior editor at Grist. You can follow her on Twitter andGoogle+.
Posted by arclein at 12:00 AM