Quite rightly, research in Brain science is booming as has all biological science. We are getting answers and lots of them.

What is missing yet though is a clear understanding of memory itself. My own conjecture is that we establish a linkage directly to the time and place in which an experience took place partly because I suspect that this will turn out to be possible and really possible at the molecular level and nature is wonderful at grabbing every opportunity.

Thus the brain is about linkages only which is just what we are looking at.

This item tells us just how exciting the field has become. 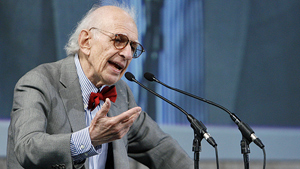 
Neuroscience is the new black, when it comes to fashion in scientific research.

“The gene was the central issue in biology in 20th century,” Nobel Laureate Dr. Eric Kandel, neuroscientist at Columbia University said in an interview in Toronto recently. “The mind is the essential issue for biology in the 21st century.”

Back in the 1960′s, when Kandel began his Nobel prize winning work searching for the biological source of memory, neuroscience was a lonely field. “It didn’t interest many biologists. Anatomy was considered boring, and electrophysiology was too technically complicated for most scientists to pay attention to,” he said.

Richard Beninger is a behavioural neuroscientist at Queen’s University, who recalls that as a student he studied the brain as a collection of parts. “You could see white matter and dark matter and lots of fine detail, right down to the neuron level, but it was all morphology, structure,” he said.

“But all of that changed, once scientists began to understand the chemical pathways in the brain. The morphology is still there, but now we know what the transmitter systems are. So we have a whole new brain only in the last 40 years to work with,” Beninger said.

Today’s technology allows scientists to put living, breathing humans into a magnetic resonance imaging machine, tell them to think about something, and watch as the biological traces of thought appear and disappear in colorful bursts, measured by changes in blood oxygen levels. It means scientists can now explore the neural landscape in real time, and chart the cognitive forces that have shaped our species from our earliest days.

As they investigate this neural wonderland, scientists are probing the very essence of what makes us human. It’s as though they are lifting the hood of humanity, and tinkering with the wiring to find how what makes us do what we do. And they are discovering that the secret to everything we do, think, or feel, is in that wiring, a constantly changing network of neuronal connections sculpted by evolution and fired by electrical and chemical interactions.

Dr. Kandel calls it the most complex organizational structure in the universe. “So we’re far from understanding it completely, very far, but the beginning has been quite dramatic,” he says.

“It’s certainly extraordinary, our entire experience of life, all of our mental experiences, if they all result from the activity of chemistry in our brain, the activity of neurotransmitters and neurocircuits, it’s amazing,” Beninger said.


For Beninger, dopamine is the most fascinating neurotransmitter, allowing us to interact with our environment, sending us in search of the things we need for survival. “Something that’s biologically valuable, food, for example, water, sexual partner, social companion, social cooperation, those are things that activate the dopamine system,” he says.

“These systems are ancient, you know, fruit flies have similar systems, and worms,” he says. “They’re found in fish and all vertebrates, they’re very old, these dopamine neurons,” Beninger said.

Which means the same chemical impulses that lead a fruit fly to dive into your wineglass also makes you reach for the bottle and pour that second glass.

Dopamine does its work through a form of unconscious learning, teaching the brain to recognize environmental cues, sights sounds, smells, feelings that lead back to the thing that first excited the reward pathway, even if that ‘thing’ is dangerous. “So drugs that are abused by people, all of them activate the dopamine system,” Beninger explains.

The brain and food addiction


“Because they’re so palatable, we tend to eat a lot of them and they give us a greater dopamine boost than broccoli does,” Davis said. “The things loaded with sugar, loaded with fat, salt, in combination they’re very, very hard to resist and there’s evidence that if you eat enough of these foods, in some vulnerable people, they display behaviour that is very similar to the behaviour that we see in other addicts.”

When lab rats are given access to sugary food, they binge, and when the sugar is taken away they show physical withdrawal systems that resemble the animal’s withdrawal from heroin. Research has shown that dopamine is one of the pathways activated in these sugar-addicted mice.

Caroline Davis has discovered a dopamine link in food-addicted humans, a genetic profile that is associated with stronger dopamine signalling, and she believes those genes might make some people more vulnerable to dopamine’s cues.


Back at Queen’s University in Kingston, Ont., Richard Beninger is watching a series of videos of laboratory rats on a chin up bar, taken by his students. When a normal rat is placed on the bar, it gets down immediately. But something amazing happens when researchers give the animal a drug that blocks the dopamine receptors. Now the rat stays on the chin up bar, longer and longer after every dose.

“The animal will just sit there if their dopamine is blocked. It’s not that they can’t move, they are just not motivated to move,” Beninger said. “It seems that you need dopamine to engage in the environment.”

“I’m still struggling to understand the implications of this condition, ‘catalepsy,’ he said. But he calls it an exciting finding. “I think there’s some new, valuable information in this phenomenon.”

“I think the cues that are around us, the things we interact with day to day, all that we are able to respond to, pick up, and handle, all that requires a certain level of dopamine. And if we repeatedly are exposed to stimuli, with dopamine reduced, we lose our ability to respond to those particular stimuli. It seems that dopamine gives you a reason to move, get off the bar, act on a stimuli, and without it, you have no interest in reacting the stimuli or environment.”

Beninger says it resembles the movement disruption in people with Parkinson’s disease, which is associated with reduced dopamine activity, something he is also studying in his lab.


Beninger is also studying how dopamine shapes our relationships. It seems that when someone is nice to us, our dopamine will draw us back to that person.

If they understand brain chemistry neuroscientists believe they will be able to offer therapies to fight mental illness and improve the entire human experience. And Dr. Eric Kandel says discoveries are inevitable, in part because there are now so many scientists in the field.

“When I was a medical student, I wanted to take an elective in brain cell science, but there was only one lab in New York City that had a good person I could work with. It was unheard of. Now you go in the street and every other person you meet is doing brain science.”

“I was working in a lab for the first time in 1955. By 1969, a society had formed in North America, called the Society of Neuroscience, and it had 600 members. Now it has 35,000 members. The number of people now working in brain science has grown enormously. It’s gone from an arcane discipline. Now it’s one of the most exciting, if not the most exciting area in biology.”

This is part two of a four part series called Inside Your Brain on CBC’s The National, World at Six and CBC.ca exploring how modern neuroscience is changing the way we think about the way we think. In part three Kelly Crowe discovers that our brains are highly active even when we perceive them to be idle and the idle brain may be the key to conciousness. The research for this series was funded by a Canadian Institutes of Health Research journalism award.

i feel so stupid.