'Strongest Evidence of Life on Mars' 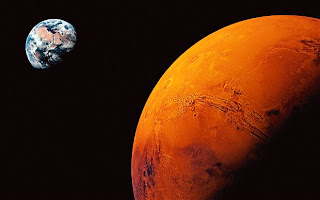 Right now, it would be astonishing to discover no subterranean life on Mars. This goes out and makes the argument.

The serious question is not so much that life does exist, but whether it naturally conforms to terrain life and if any conflicts exist. I think that the probability is on the side of fairly safe compatibility because inter planet transport has been shown to be an real effect.

It is also creditable that life began here as an interstellar transport to begin with. That still does not answer the question of first mover, but eliminates the question of life throughout the universe generally. There is likely no such thing as a barren solar system and it is merely a function of the availability of congenial local conditions.

This could mean that our biology is at least compatible with life everywhere for good or for ill I should warn here. After all, our biology was quite compatible when Columbus did his thing. Yet Mars is presently an inoculated planet without the advanced biology we have. So it may be just fine.


'Strongest evidence yet to there being life on Mars'

Martian rocks from a crater hit by a meteorite may contain the strongest evidence yet that there is life on Mars.


Prof John Parnell, 55, has co-written a theory with Dr Joseph Michalski, a planetary geologist at the Natural History Museum, that suggests they have discovered the best signs of life in the huge McLaughlin Crater on the surface of Mars.

The document, published today in Nature Geoscience journal, describes how they assessed the crater, created by a meteorite which smashed into the surface of Mars, flinging up rocks from miles below.

The rocks appear to be made up of clays and minerals which have been altered by water - the essential element to support life.

Speaking from his laboratory at the University of Aberdeen, geochemist Prof Parnell said: "We could be so close to discovering if there is, or was, life on Mars.

"We know from studies that a substantial proportion of all life on Earth is also in the subsurface and by studying the McLaughlin Crater we can see similar conditions beneath the surface of Mars thanks to observations on the rocks brought up by the meteorite strike.

"There can be no life on the surface of Mars because it is bathed in radiation and it's completely frozen. However, life in the sub surface would be protected from that.

"And there is no reason why there isn't bacteria or other microbes that were or still are living in the small cracks well below the surface of Mars.

"One of the other things we have discussed in our paper is that this bacteria could be living off hydrogen, which is exactly the same as what microbes beneath the surface of the Earth are doing too.

"Unfortunately, we won't find any evidence of animals as the most complex life you might get in the sub surface would be fungi.

"But fungi aren't even that far removed from plants and animals, so I think you could say that life on Mars could be complex, but small."

Prof Parnell reckons that although the next mission to Mars will have a drill to examine possibilities of life beneath the surface of Mars, he says his new study suggests looking around the edges of craters would be easier and more beneficial.

"One approach to do that might be to drill and indeed the next European mission to Mars will have a drill on it, but that will only go down about two metres.

"And although drilling two metres on Earth would be a fantastic technological achievement, it's only really scratching the surface.

"So the alternative is to use what nature has done for us and that's why we are are particularly interested in the McLaughlin Crater that we have investigated in our paper.

"Because when a meteor lands, it excavates a big hole in the ground and throws rocks from the bottom of the hole outside the crater to where we could conceivably go and sample them."

And while the craters on Mars may uncover secrets about the planet's possibility of supporting life, Prof Parnell also revealed the results could show us how life on Earth began.

He said: "It's very easy to draw parallels between what Mars looks like and what the early Earth might have looked like, because the rocks on Earth that we see now have been recycled a lot in ways that they have not been recycled on Mars.

"Mars has not had things like erosion and shifting of mountain ranges to destroy vital evidence from the past.

"So studying meteorite craters of Mars may well actually give us an indication to how life on Earth began.

"Although we all live on the surface of Earth, life did not originate here, but actually in the sub surface.

"It was only when life had taken hold below the surface that it gradually expanded and came up to the surface.

"In fact, there's so much life below the surface of our planet that we are actually the unusual ones living above it."