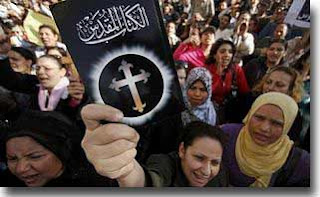 The serious problem is that transition from authoritarian regimes to the demos also unleashes nasty sectarian behavior. All minorities provide easy targets for newly emerging power centers. The problem is surviving the process until the demos settles down and power seekers must attract votes. That is often too long and too dangerous and Christian minorities know that a simple move will end the problem. The truth is that Christians do have an option.

Otherwise, Islamic minorities do not and worse, the authoritarian regime often depended on the minority to enforce their writ as is true in Syria. For that reason the likely resolution will be the establishment of a Alawite enclave that is effectively independent.

In the meantime, over several years, the Christians will migrate.

This collapse of institutional toleration actually sets the stage for a separation of the Arab and non Arab polity and continuing confrontation with modernism.

No way back for Syria's Christians


Pope Benedict XVI, as well as other Christian leaders, have decried the exodus of Christians from the Mideast - the cradle of Christianity. Posed with terrorism and killings directed at them by Islamist groups, Christians in Iraq, Egypt, Lebanon and elsewhere in the Muslim world have had to seek refuge in the West. ProfessorYossi Shain, head of the Abba Eban Diplomacy Program at Tel Aviv University, says that Islamists are pushing more and more Christians out of the Middle East. In an analysis published by Ynetnews, Shain wrote, "The reasons for the Christians’ crisis in our region are related to their success as a modern group with low growth rate and free immigration to Western countries. But the assault on the Christians in their home countries stems mostly from the processes of Islamization, which push them away from the Arab collective."

Professor Shain notes the historic contribution Mideast Christians made in developing a modern Arab identity and formulating governments free of religious preferences. However, the political topography of the entire Arab region has changed, said Shain. Writing at Ynet, Shain said "But the Arab-national vision that includes the Christians does not exist anymore – not even in theory. In traditional Arab countries, such as Saudi Arabia, the Christians have lost their place entirely. But their situation has deteriorated in other countries as well. Hardly any Christians remain in Algeria, Tunisia and Libya, where in the past they were almost the majority. The Christians' situation in Iraq took a turn for the worse following the fall of Saddam Hussein, who used them against the Shiite majority."

It is Syria's Christians who are most in danger. For years, during the Assad regime, Christians were protected by an authoritarian and secularist state. However, Christians now fear that should the Islamist insurgents take power that Christians' lives may be forfeit. In recent weeks, Terry Waite - who was once held captive for four years by Islamists as an emissary of the Anglican Church - visited the Syria-Lebanon border region. Writing in The Guardian, Waite warned "Syria has a unique and rich history of religious diversity and tolerance, and in the past Christians and Muslims have shared the same place of worship. Since the beginning of Islam, they have lived in relative harmony – but the war is pushing Christians out, and many believe there will be no way back."

Worthy as the proponents of political change may be, there are now elements of the Arab spring that have been hijacked by Islamic extremists who want to impose sharia law and banish Syrian Christians, who make up about 10% of the population. This has created a very hostile environment for minorities. I met refugee families living in dire circumstances in Lebanese border towns, and heard first hand their harrowing stories."

The dire situation faced by Christians of the Mideast  is somewhat similar to the situation of the Jews in Europe before and during the Second World War. The world's relative silence in the face of their plight serves as another warning sign to those who believe the enlightened world is willing to lend a hand at times of crisis.

What did anyone expect would happen? After all the Jews were pushed out/attacked/killed/exiled, etc., from the same regions, why would Christians think they would escape the same fate?

In any case, it appears the Arab Spring only applies to the politically correct Muslims.