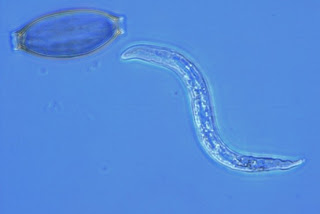 I posted on this therapy some months past and communicated with folks who had benefited from this unusual therapy which certainly has its own internal logic.  This item reports that since then, a couple of clinical trials have gotten underway with promising results.

It is pretty obvious that our living environment has become overly clean and also rather uniform.  We no longer get out in the field and breath soil dust day in and day out.  In fact there is little to stimulate our immune system at all except the wide spectrum of human based viruses and pathogens that now track into our world globally through better communication.

Yet we are engineered to handle all local insults in the course of a day’s work and this exposure is no longer the case for most for us.

Until we reorganize society to overcome this shortfall, the risk of disturbed sensitivity will continue.  Thus the use of safe parasites is certainly indicated.

In a Squeaky-Clean World, a Worm Might Help Fight Disease

Some bugs are good for our health, and a pig parasite called the whipworm appears to be one of them.

Whipworm eggs have been found in human studies to reduce symptoms in a host of diseases that affect the immune system. Researchers at several universities have shown promising results in small numbers of patients with multiple sclerosis, Crohn's disease and ulcerative colitis. Biotechnology companies are conducting large clinical trials of the treatment. Other studies targeting rheumatoid arthritis, autism and some allergies are expected to begin this year.

Scientists have been trying to figure out why diseases that affect the immune system have increased dramatically over the past several decades in much of the developed world. For example, the incidence of asthma in children under 17 was up 28% in 2009 from 1999, according to government data.

The whipworm treatment was born from a theory known as the hygiene hypothesis, which essentially says our environment has become too clean. Humans aren't exposed to microorganisms in the environment as much as they used to be, when more people farmed or lived closely with animals.

While many diseases have diminished thanks to improved hygiene and medicine, people aren't exposed to bacteria that helped regulate the immune system, the theory goes. This lack of exposure may, in part, be responsible for the increase in diseases in which the body's immune system goes awry.

Based on this hygiene hypothesis, researchers at the wanted to find a safe parasite—one that wasn't known to cause infection or illness in humans—for therapeutic purposes. This type of treatment is known as helminthic treatment, or more specifically TSO, from the Latin name for whipworm eggs: Trichuris Suis Ova.

"It looks like the helminth [the parasite] rebalances the immune system," says Bobby Sandage, chief executive of Burlington, Mass.-based Biosciences, which is finishing up an early-stage clinical trial of whipworm to treat Crohn's disease. A Phase 2 trial is planned for this year.

In many autoimmune diseases, immune cells known as T1 cell cytokines proliferate and fight against the body's cells, the way they do when the body detects foreign invaders.
A Beneficial Bug?

Clinical trials using whipworm therapy have been run or are planned for the following conditions:

Source: BiosciencesPatients and study participants consume microscopic whipworm eggs, above left, which hatch into worms, right, in the intestines. The worms appear to spur a beneficial immune-system reaction.

The introduction of the whipworm appears to spur the body to produce more of a different type of helpful immune cell—T2 helper cytokines—as a defense against the worms. This separate immune response appears to help counter the inflammatory response from diseases, say researchers.

This approach differs from many available treatments on the market for inflammatory diseases. If these drugs, which tend to suppress the immune system, are given in doses that are too high, the immune system can be compromised, says Robert Summers, a professor in gastroenterology and hepatology at the University of Iowa who helped run the trials.

TSO treatment is likely to be much less hazardous because it doesn't directly attack the body's immune system, says Dr. Summers.

When it comes to using bugs as treatment, one key, of course, is finding ones that won't sicken people.

Whipworm from pigs appeared to be a good candidate because they don't naturally infect humans and can't reproduce in them. Once the eggs are ingested, they pass through the stomach to the intestine. There, the worms hatch and latch on, and apparently prompt the modulating effect in the immune system. After about two weeks, they die and are absorbed or excreted.

Dr. Summers and his colleagues demonstrated encouraging findings in two studies published in 2005. One examined 29 patients with Crohn's disease and found that after six months, 21 were considered remitted. (There wasn't a control group for comparison.) The other was study of 54 patients with ulcerative colitis. Patients who received TSO treatment improved significantly more than those who got placebo.
Another area of interest for TSO researchers is in multiple sclerosis, with two small studies published last year. One of these, published in the Multiple Sclerosis Journal, showed brain lesions decreased in four of five patients three months into treatment, and rebounded two months after it ended.

Some researchers say the therapy could hold promise for autism as well.

Eric Hollander, director of the Autism and Obsessive-Compulsive Spectrum Program at Montefiore Medical Center and Albert Einstein School of Medicine in the Bronx, N.Y., expects to begin recruiting for a human trial in adults with autism by the end of March.

"People are just beginning to think about modifying the immune inflammatory response to see if it has some sort of effect on behavioral symptoms," says Dr. Hollander.
In 2005, Stewart Johnson, a portfolio manager at an insurance company in , and his wife were at their "absolute limit" with their then 14-year-old autistic son. Mr. Johnson says he exhibited extremely disruptive behaviors, and agitation. The Johnsons were close to putting their son in a residential facility.

Around this time their son made his yearly trip to summer camp—always a difficult time.
But one day, says Mr. Johnson, a camp counselor called, saying his son was calm and behaving better than he had ever seen. The night after Mr. Johnson picked up his son—finding he was indeed well-behaved—he saw his son's legs were covered with many bites from chiggers, the larvae of mites. After about 10 days, the disruptive behaviors returned. "I said, 'this can't be coincidence,'" says Mr. Johnson.

He started doing research, heard theories that the immune system may play a role in autism, and came across the work on whipworm eggs and Crohn's disease. He was able to obtain a supply to test on his son, though first he took the ova himself to make sure they were safe. The eggs, which aren't yet available in the , cost €300 ($396) for a two-week vial, Mr. Johnson says.

After a reduced dosage of the invisible, tasteless eggs failed to help, Mr. Johnson consulted with the supplier, OvaMed GmbH, of , and bumped up the dosage. In about 10 weeks, the disruptive behaviors ceased.

The younger Mr. Johnson, who declined to comment, lives at home and has been taking the eggs ever since. The worst symptoms don't return so long as he stays on the treatment, Mr. Johnson says.

It would be interesting to compare autoimmune diseases between agricultural workers in the hog industry and the general population.

I have thought that autoimmune disease was a tentative diagnosis in the first place. i.e. - the immune system is going crazy so blame it.

Clearly it is demonstrating an unbalanced immune system that however inflamed, is doing greater damage than is called for.

The point is that it is unbalanced and the options for induction are two obvious ones. The system is either over stimulated or it is insufficiently stimulated. The first is common in the battle against recognized disease and is generally understood.

The second appears with no other disease vector and simple lack of stimulation is the threat. Yet respiratory disease appears to be well stimulated while gastrointestinal disease appears to be causing problems. Thus using benign parasites is a pretty good call until we do something better.

Once past the yuck factor, it is easier to handle that leeches stimulating blood flow.