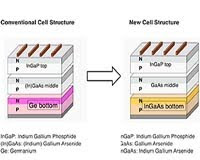 This will not be in a market very soon. I am sure, because of cost issues. However it means that for critical applications, it is possible to achieve 35% which is a far cry from what can be supplied to the domestic market which operates as yet between 10 and fifteen percent.

As I have posted, there are pretty neat things been accomplished in the lab, and until we transition to a complex three dimensional nano architecture, the best results will run somewhere between 30 and perhaps 40 percent. This is obviously pretty good. It just is not cheap.

Every lab has understood the goal posts for decades. It is a little hard to imagine that this effort has been underway for so long, yet that is typical of technology research. The legend of the eureka moment is obviously overrated.

This will be of great value where money is not an issue and where surface area is.

Sharp has now succeeded in forming an InGaAs layer with high crystallinity by using its proprietary technology for forming layers. As a result, the amount of wasted current has been minimized, and the conversion efficiency, which had been 31.5% in Sharp's previous cells, has been successfully increased to 35.8%.

Sharp has achieved the world's highest solar cell conversion efficiency (for non-concentrator solar cells) of 35.8% using a triple-junction compound solar cell. Unlike silicon-based solar cells, the most common type of solar cell in use today, the compound solar cell utilizes photo-absorption layers made from compounds consisting of two or more elements such as indium and gallium.

Due to their high conversion efficiency, compound solar cells are used mainly on space satellites.

Since 2000, Sharp has been advancing research and development on a triple-junction compound solar cell that achieves high conversion efficiency by stacking three photo-absorption layers.

To boost the efficiency of triple-junction compound solar cells, it is important to improve the crystallinity (the regularity of the atomic arrangement) in each photo-absorption layer (the top, middle, and bottom layer).

It is also crucial that the solar cell be composed of materials that can maximize the effective use of solar energy.

Conventionally, Ge (germanium) is used as the bottom layer due to its ease of manufacturing. However, in terms of performance, although Ge generates a large amount of current, the majority of the current is wasted, without being used effectively for electrical energy.

The key to solving this problem was to form the bottom layer from InGaAs (indium gallium arsenide), a material with high light utilization efficiency. However, the process to make high-quality InGaAs with high crystallinity was difficult.

Sharp has now succeeded in forming an InGaAs layer with high crystallinity by using its proprietary technology for forming layers.

As a result, the amount of wasted current has been minimized, and the conversion efficiency, which had been 31.5% in Sharp's previous cells, has been successfully increased to 35.8%.