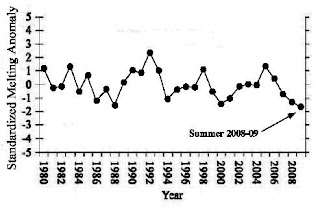 This is interesting. We knew that the Antarctic was trending downward in terms of the temperature proxies. Thus while the Arctic has climbed to a warmer regime and more or less sustained that regime for a decade with slight cooling, the Antarctic seems to have been on a twenty year downtrend that is consolidating at the low side with dropping volatility.

These types of proxies are as good as we have and it is hard not to accept them for more than they are.

All such proxies are selected data points of varying quality. Because of their location, there are not many of them. However, satellite based strategies provide a large potential sample size that give us confidence that is now sorely missing from land based systems.

My point is that I am fully prepared to accept the Antarctic results as given and as quite reliable. I do not know if we are as well situated in the Arctic but we should be.

This article beats on the press’s silence as perhaps it should. A cooling Antarctic is flying contrary to any global warming hypothesis and quite bluntly defies explanation or accommodation. It really needs to go away.

Otherwise, I can propose that the global heat engine is presently switching a slight surplus of heat into the North. Yet it is hard to say more or any less for that matter. A simple switching procedure is not what alarmists want to hear.

The ice melt across during the Antarctic summer (October-January) of 2008-2009 was the lowest ever recorded in the satellite history.

Such was the finding reported last week by Marco Tedesco and Andrew Monaghan in the journal Geophysical Research Letters:

A 30-year minimum Antarctic snowmelt record occurred during austral summer 2008–2009 according to spaceborne microwave observations for 1980–2009. Strong positive phases of both the El-Niño Southern Oscillation (ENSO) and the Southern Hemisphere Annular Mode (SAM) were recorded during the months leading up to and including the 2008–2009 melt season.

The real rate of melt is likely higher than evidence suggests. Sun spot activity is currently at a minimum in an 11 year cycle. That makes the sun cooler. Sun spots are predicted to increase over the next 5 years making the sun hotter and should cause more record breaking arctic melts.
http://solarscience.msfc.nasa.gov/SunspotCycle.shtml

I will go a bit farther than that. The evidence supports a pretty uniform melt for the past two decades. What is happening now is that we have much less ice to absorb the annual heat injection. That is why I continue to expect to a final breakup or crisis in the next three years.

The fact that the thick stuff broke up so easily this fall is unanticipated and certainly shortens the breakup period. 2012 goes from a strong maybe to almost unavoidable. In other words there is little left to stop it from nicely melting out.