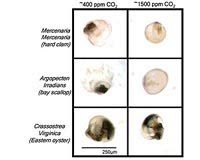 As you might imagine, this is not going to happen any time soon, but it demonstrates a possible consequence of continuing to build up the CO2 content in the atmosphere. I am really not too sure about this because the ocean is sponge for CO2 and a major active part of the CO2 cycle in the same way the ocean is for water.

The issue is simply that we are producing a huge amount of CO2 and we all agree that this is likely a bad idea. The good news is that the transition to a non carbon economy is both possible and also starting to happen, with or without cheap sources of energy. A lot will transition fairly fast but the stupendous growth of the global economy will keep a lot of that carbon based power afloat.

However, global change is presently so fast that we are no longer talking a century but are talking decades. The USA and Europe can fully change out their entire rolling stock of automobiles to electric over a single decade. Heavy transport will change out in the decade after. This leaves the carbon market only the coal power industry and that is waiting to see if we will have success with hydrogen boron fusion energy. If that occurs, the total conversion will take perhaps ten to fifteen years worldwide.

The whole issue of carbon dioxide is about to become mute when that happens.

We may end up deciding some day that it is a good idea to burn coal simply to produce CO2 to replace that which we are naturally sequestering as we terraform the planet with deep rich soil and intensive agriculture.

At the end of experiments (about 20 days) larvae of the hard clam, bay scallop, and Eastern oyster that were raised in seawater with high carbon dioxide concentration (right column) were smaller and later to develop than larvae raised in seawater with carbon dioxide concentration matching current ocean levels (left column.) Credit: Stephanie Talmage

Relatively minor increases in ocean acidity brought about by high levels of carbon dioxide have significant detrimental effects on the growth, development, and survival of hard clams, bay scallops, and Eastern oysters, according to researchers at Stony Brook University's School of Marine and Atmospheric Sciences.

In one of the first studies looking at the effect of ocean acidification on shellfish, Stephanie Talmage, PhD candidate, and Professor Chris Gobler showed that the larval stages of these shellfish species are extremely sensitive to enhanced levels of carbon dioxide in seawater. Their work will be published in the November issue of the journal Limnology and Oceanography.

"In recent decades, we have seen our oceans threatened by overfishing, harmful algal blooms, and warming. Our findings suggest ocean acidification poses an equally serious risk to our ocean resources," said Gobler.

During the past century the oceans absorbed nearly half of atmospheric carbon dioxide derived from human activities such as burning fossil fuels. As the ocean absorbs carbon dioxide it becomes more acidic and has a lower concentration of carbonate, which shell-making organisms use to produce their calcium carbonate structures, such as the shells of shellfish.

In lab experiments, Talmage and Gobler examined the growth and survivorship of larvae from three species of commercially and ecologically valuable shellfish. They raised the larvae in containers bubbled with different levels of carbon dioxide in the range of concentrations that are projected to occur in the oceans during the 21st century and beyond.

Under carbon dioxide concentrations estimated to occur later this century, clam and scallop larvae showed a more than 50% decline in survival. These larvae were also smaller and took longer to develop into the juvenile stage. Oysters also grew more slowly at this level of carbon dioxide, but their survival was only diminished at carbon dioxide levels expected next century.

"The longer time spent in the larval stage is frightening on several levels," said Talmage. "Shellfish larvae are free swimming. The more time they spend in the water column, the greater their risk of being eaten by a predator. A small change in the timing of the larval development could have a large effect on the number of larvae that survive to the juvenile stage and could dramatically alter the composition of the entire population."

"This could be an additional reason we see declines in local stocks of shellfish throughout history," said Talmage. "We've blamed shellfish declines on brown tide, overfishing, and local low-oxygen events. However it's likely that ocean acidification also contributes to shellfish declines."

Talmage and Gobler hope their work might help improve the success rate of shellfish restoration projects.

"On Long Island there are many aquaculturists who restock local waters by growing shellfish indoors at the youngest stages and then release them in local estuaries," said Talmage. "We might be able to advise them on ideal carbon dioxide conditions for growth while larvae are in their facilities, and offer suggestions on release times so that conditions in the local marine environment provide the young shellfish the best shot at survival.