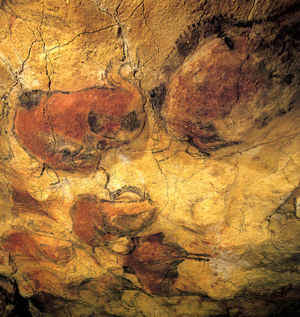 Whatever else happened, we now are having other members of the settlement introduced to the reader.

More importantly, God is clearly personified and acts as if he is the person responsible for the management of the settlement and is obviously none too happy with the behavior of his charges. Recall that the first mention of God is as the spirit of God. Thereafter he is front and center as a living breathing entity empowered to advance the interests of the settlement.

This is important. God is acting as a government administrator who is available to provide guidance to the settlers. The reins are not tight because it is understood that the members must become independent. Murder occurs and offends. The idea of offerings to this leader is introduced. From this beginning, the priesthood could promote the concept of religious offering.

If we assume that the earth adapted clones were established in a protected garden on a space habitat or even a protected valley on Earth, then what we are reading conforms. This is a tale in which the future inhabitants of Earth are been nurtured and trained for their role in protected circumstances, while ignorant of a greater culture.

It would be as if we terraformed Venus and then prepared a group of colonists to occupy Venus who knew nothing of us. This is the story been told.

It is not creditable that this story was created by a people who confronted every day with a spear in their hands and sleeping in a thorn thicket to avoid predation. It is equally not creditable that this was imagined by a people who grew crops to the cycle of the sun and stars which get no mention in any of this material but is dominant throughout other mythologies.

This part is mythic and iconic. It provides us also with a register of births descended directly from Adam, but no specific mention is made of the women who needed to exist. Undoubtedly the initial community was ample enough to provide sufficient genetic diversity. However, this fact and other related facts are suppressed in order to provide a mythic simplified story.

The capacity of the ark suggests that the settlement size was likely close to a couple of thousand, sufficient to create a dominance in the area of settlement.

1 Adam [a] lay with his wife Eve, and she became pregnant and gave birth to Cain. [b] She said, "With the help of the LORD I have brought forth [c] a man." 2 Later she gave birth to his brother Abel.

Now Abel kept flocks, and Cain worked the soil. 3 In the course of time Cain brought some of the fruits of the soil as an offering to the LORD. 4 But Abel brought fat portions from some of the firstborn of his flock. The LORD looked with favor on Abel and his offering, 5 but on Cain and his offering he did not look with favor. So Cain was very angry, and his face was downcast.

6 Then the LORD said to Cain, "Why are you angry? Why is your face downcast? 7 If you do what is right, will you not be accepted? But if you do not do what is right, sin is crouching at your door; it desires to have you, but you must master it."

Observe that the Lord God must ask questions and is not all knowing. That puts him on the same plane as those he oversees. He is not so different.

13 Cain said to the LORD, "My punishment is more than I can bear. 14 Today you are driving me from the land, and I will be hidden from your presence; I will be a restless wanderer on the earth, and whoever finds me will kill me."

15 But the LORD said to him, "Not so [e] ; if anyone kills Cain, he will suffer vengeance seven times over." Then the LORD put a mark on Cain so that no one who found him would kill him. 16 So Cain went out from the LORD's presence and lived in the land of Nod, [f] east of Eden.

19 Lamech married two women, one named Adah and the other Zillah. 20 Adah gave birth to Jabal; he was the father of those who live in tents and raise livestock. 21 His brother's name was Jubal; he was the father of all who play the harp and flute. 22 Zillah also had a son, Tubal-Cain, who forged all kinds of tools out of [g] bronze and iron. Tubal-Cain's sister was Naamah.

The Bronze Age tool kit is introduced, including harp and flute.

23 Lamech said to his wives, "Adah and Zillah, listen to me; wives of Lamech, hear my words. I have killed [h] a man for wounding me, a young man for injuring me.

24 If Cain is avenged seven times, then Lamech seventy-seven times."

25 Adam lay with his wife again, and she gave birth to a son and named him Seth, [i] saying, "God has granted me another child in place of Abel, since Cain killed him." 26 Seth also had a son, and he named him Enosh. At that time men began to call on [j] the name of the LORD.

It is reasonable to assume that at the time that this work was compiled, that it was important to fit in a genealogy that captured what was recalled of the group’s ancestry. It appears that we have a blend of reports derived from the original settlement that ring true and a linked in genealogy to relate to the audience. The original reports were likely much older than the implied genealogy linked to it and could have been completely unconnected.