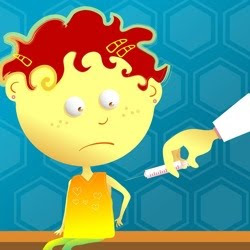 How rarely we publish good news. The global immunization campaign is possibly the first significant global public policy initiative organized at the governmental level. It has been rolling along for decades, and despite the annual grumbling, it is really an outstanding policy success.

This reports tells us that the number of one year old babies not been immunized has dropped to 24 million or perhaps a fifth of the total. Even if it was physically impossible to reach the balance, and I am sure that over time, a lot get their shots, the biological effect is immense. Everywhere, only a small fraction of the population is vulnerable. The prospect of maintaining a pool of disease in a sea of the immune is difficult and usually a downtrend begins.

In the meantime, we are been exposed to a public flap over swine flue that is perhaps a bit over the top, but will certainly chase everyone in this year to get their blanket coverage renewed. The industry has obviously prospered and this is plausibly a test run of their ability to react to a truly serious threat that can kill thousands. It is obviously working quite well.

Unheralded, is the fact that Africa is almost visibly responding to this preemptive treatment. A whole range of childhood killers are been brought under control. This began a long time ago, and many that are adults with their own children are prospering in good health today.

The point is that good health is changing the economies of even the poorest of the poor.

A new report highlights the success of worldwide vaccine and immunization programs, but cautions about continued challenges and high costs

More children are now immunized across the globe than ever before, according to the 2009 The State of the World's Vaccines and Immunization Report, released Wednesday. An estimated 106 million infants received vaccinations in 2008, noted the analysis published by the World Health Organization (WHO), the United Nations Children's Fund (UNICEF), and The World Bank.

"This represents more than 2.5 million deaths prevented," Jon Andrus, deputy director of the Pan American Health Organization (PAHO), said at a press briefing about the results. "Is that enough? No." Some 24 million infants worldwide still do not receive all of the recommended inoculations in their first year.

The Global Immunization Vision and Strategy (GIVS), co-sponsored by WHO and UNICEF, estimates that by vaccinating 90 percent of the world's children against 14 illnesses for which there are vaccines (diphtheria, pertussis, tetanus, measles, polio, tuberculosis, hepatitis B, Hib disease, rubella, meningococcal disease, pneumococcal disease, rotavirus, and, where applicable, Japanese encephalitis and yellow fever), another two million child deaths could be prevented. If achieved, that number would go a long way toward meeting the goals of the 2000 United Nations Millennium Declaration, which sought to decrease mortality in children under five by two thirds by 2015 (using 1990 figures as a basis).

"This is about saving lives," Daisy Mafubelu, WHO assistant director general of Family and Community Health, said at the briefing. But saving lives does not come cheaply. Reaching the GIVS goals would cost about $76 billion, as the cost of immunizing each child is on the rise.

In the 1980s immunizing each child cost only a few dollars on average. But by next year it is expected to run about $18. To meet the GIVS target, that figure would increase to $30, due to the sheer number of vaccines required and the complexity of newer formulas. Such per-child costs may not sound like much in today's expensive U.S. health care market, but for many developing countries, that is more than 10 percent of annual per capita income.

Much of the tab is picked up by governments, although international aid organizations, such as UNICEF, are currently buying more than half of the vaccines that go to children.

All the money also adds up to a mammoth industry. Having burgeoned to nearly three times its 2000 size, the global market for vaccines was more than $17 billion last year. As vaccine and immunization programs expand and become more stable, more drugmakers are inclined to get into the market. "With bigger volume—and bigger predictable volume—we're getting more manufacturers entering," Helen Evans, deputy chief executive officer of the Global Alliance for Vaccines and Immunizations, said at the meeting. And the growing amount of competition has helped to drive down the price of individual vaccines.

The substantial costs can be recouped in the long run by savings on subsequent reduced medical treatment for the illnesses. The cost of vaccinating against smallpox across the globe between 1967 and 1977 cost about $100 million. The eradication of the disease, however, has saved an estimated $1.3 billion a year since then, according to the report.

"Immunization does not only save lives, it improves them," Saad Houry, deputy executive director of UNICEF, said at the briefing. It can also improve the health of a nation's economy. Even those who survive preventable childhood illnesses are often either physically disabled or less educated (due to missed school) and are unable to contribute as much to the economy as healthier individuals.

A hobbled international economy will certainly put new strains on expensive international vaccination programs, although the recession has not impacted UNICEF's funding for vaccines, and many countries have continued to support purchases despite declining GDPs, Houry said. An increase in overall poverty, however, will likely mean fewer children are immunized. "Of [the] 89 million people who will be pushed back into poverty" by the global recession, Rakesh Nangia, The World Bank Institute'svice president and director of strategy and operations for the bank's Human Development Network, said at the briefing, "many of the children will not be able to get their vaccines."

Promising new vaccines also present new challenges. Those meant for adolescents, such as the human papillomavirus (HPV) vaccine, or for adults, such as the H1N1 vaccine, will need new tactics for distribution. Public health workers in the field hope to capitalize on existing distribution channels to reach some recipients—as they already do for distributing other preventative tools such as vitamin supplements and mosquito bed nets—but more strategizing remains.

The last 20 percent of the population not receiving the inoculations will be the hardest to reach, UNICEF's Houry noted. That fifth also usually includes those who don't receive other health or basic services, a sign of deeper inequity. Just physically getting vaccines to many rural populations can present incredible logistical challenges, especially in tropical climates where continuous refrigeration of vaccine courses is especially difficult. "In many cases the systems of delivery are very weak," Nangia said.