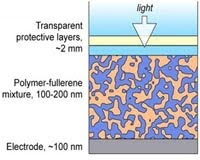 Although there are other methods of producing solar cells that are presently getting the attention, a method of producing such material from organic polymers is obviously attractive. This item reports on a recent advance.

The bench mark that needs to be presently met is to develop efficiencies in excess of ten percent in order to be taken seriously.

Another problem with polymers is operational stability, which may not be a problem at all since it is the most obvious issue and will channel attention.

If they actually get this to work well enough, we can assume it quickly becoming ubiquous in manufacturing simply because all manufacturing is about working with organic polymers anyway. Who knows, perhaps we will have kids toys that are self energized on exposure to sunlight.

University of California-Santa Barbara Professor Guillermo Bazan and colleagues said they've been able to reduce reaction time by 99 percent, while more than tripling the average molecular weight of the polymers.

The scientists said the reduced reaction time effectively cuts production time for the organic polymers by nearly 50 percent, since reaction time and purification time are approximately equal in the production process, in both laboratory and commercial environments.

The higher molecular weight of the polymers increases current density in plastic solar cells by as much as a factor of more than four, a major benefit, the researchers said.

The methodology "will greatly accelerate research in this area," Bazan said, "by making possible the rapid production of different batches of polymers for evaluation.

"We plan to take advantage of this approach both to generate new materials that will increase solar cell efficiencies and operational lifetimes, and to reevaluate previously-considered polymer structures that should exhibit much higher performance than they showed initially."

The research appears in the early online edition of the journal Nature Chemistry.

Duuude! Finally! I remember reading a book about solar energy that was written in the eighties, and even today, the solar cell efficency really hasn't gone up. Maybe with this stuff it will finally give solar power a boost in energy production. Solar power will likely never replace large-scale industrial power, however, such as coal, nat. gas, nuclear, etc.