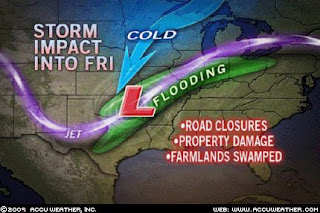 No sooner am I finished posting on the possibility of a lousy winter when it happily arrives about a month early.

This will cool the soils and set the stage for an early freeze up. This means that we are guaranteed the first half of a long cold winter.

At this rate it is likely to be so miserable that we will actually remember it. Not many winters get that reputation. Anyway we are starting it cold and fierce.

I recall my mother’s tale of seeing a snow fall in June back in 1913 after an equally early onset of winter. If we catch a cold spring ad late growing season those conditions will be replicated.

Anyway, this is a good year to stock up on some extra fuel if you have the option. You are likely to be using it up.

Friday, an even stronger surge of cold air will come down from the , sending temperatures plummeting to unprecedented levels for this time of year. In and the western , temperatures will not rise out of the 20s Friday and Saturday which is roughly 35 degrees below normal.

The arctic blast will be accompanied by more snow that will spread southward through tonight and get into and the northern Plains Friday into Friday night. The snow could come as far south as Friday night and Saturday, though it would not be anything major for that area.

Not only is it raining, it's pouring from the southern Plains to the , and no easing is expected through the night. Friday, the rain will have shifted somewhat to the east with the axis of heaviest rain extending from eastern through and then all the way to northern .

The excessive rainfall will produce two-day totals of as much as 6 and even 8 inches from to which is more than enough to produce some pretty serious flooding. That means stretches of roads under water will cause major delays and detours, not to mention all the property damage that flood waters often cause.

The heavy rain could also lead to another troublesome surge of water through the . A surge of water is believed to be responsible in part for the failure of a lock on the river northeast of last week.

The tremendous rain is being caused by a colder air mass from the north attacking a very moist flow of air from the Gulf region. These major conflicts get the atmosphere all stressed out, so it just lets loose.

In , the rain will get started later Friday then persist into Saturday morning. That far east, rain amounts won't be nearly as great as what is occurring right now.

The mid-Atlantic region from central southward will escape the worst of the storm with only some showers due Friday night and Saturday morning.