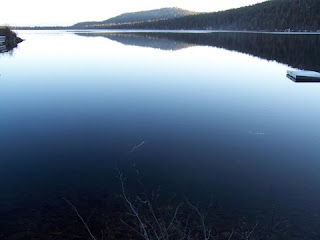 We are going to be able to conduct an empirical experiment on the validity of the Svensmark conjecture this winter. See my post for details at:

Quite simply, we are now experiencing a maximum flux of cosmic rays. This should translate into a maximized cloud cover and thusly to a maximized direct cooling effect over the next few months. Provided of course that the simple linkages hold up quite as well as proposed. I do not think that it will be quite that simple, but we will now see and gain real data to throw at the debate.

This means that we can predict a colder than usual winter this year. Stock up on firewood folks and go long on them gas futures.

As reported in the above article, it has been shown that cosmic rays trigger the formation of cloud droplets and thus release heat.

Except that I can dream up several ways to argue otherwise sufficient to frustrate any proponent. It is definitely nice to see this particular hypothesis stress tested before we all get too excited about it.

The heliospheric current sheet is shaped like a ballerina's skirt. Image credit: J. R. Jokipii and B. Thomas, Astrophysical Journal 243, 1115, 1981.

"In 2009, cosmic ray intensities have increased 19% beyond anything we've seen in the past 50 years," says Richard Mewaldt of Caltech. "The increase is significant, and it could mean we need to re-think how much radiation shielding astronauts take with them on deep-space missions."

The cause of the surge is solar minimum, a deep lull in solar activity that began around 2007 and continues today. Researchers have long known that cosmic rays go up when solar activity goes down. Right now solar activity is as weak as it has been in modern times, setting the stage for what Mewaldt calls "a perfect storm of cosmic rays."

"We're experiencing the deepest solar minimum in nearly a century," says Dean Pesnell of the Goddard Space Flight Center, "so it is no surprise that cosmic rays are at record levels for the Space Age."

Galactic cosmic rays come from outside the solar system. They are subatomic particles--mainly protons but also some heavy nuclei--accelerated to almost light speed by distant supernova explosions. Cosmic rays cause "air showers" of secondary particle when they hit Earth's atmosphere; they pose a health hazard to astronauts; and a single cosmic ray can disable a satellite if it hits an unlucky integrated circuit.

The sun's magnetic field is our first line of defense against these highly-charged, energetic particles. The entire solar system from Mercury to Pluto and beyond is surrounded by a bubble of magnetism called "the heliosphere."

It springs from the sun's inner magnetic dynamo and is inflated to gargantuan proportions by the solar wind. When a cosmic ray tries to enter the solar system, it must fight through the heliosphere's outer layers; and if it makes it inside, there is a thicket of magnetic fields waiting to scatter and deflect the intruder.

"At times of low solar activity, this natural shielding is weakened, and more cosmic rays are able to reach the inner solar system," explains Pesnell.

Mewaldt lists three aspects of the current solar minimum that are combining to create the perfect storm:

"If the flattening continues, we could see cosmic ray fluxes jump all the way to 30% above previous Space Age highs," predicts Mewaldt. [data]

Earth is in no great peril. Our planet's atmosphere and magnetic field provide some defense against the extra cosmic rays. Indeed, we've experienced much worse in the past. Hundreds of years ago, cosmic ray fluxes were at least 200% to 300% higher than anything measured during the Space Age.

Researchers know this because when cosmic rays hit the atmosphere, they produce an isotope of beryllium, 10Be, which is preserved in polar ice. By examining ice cores, it is possible to estimate cosmic ray fluxes more than a thousand years into the past. Even with the recent surge, cosmic rays today are much weaker than they have been at times in the past millennium.

"The space era has so far experienced a time of relatively low cosmic ray activity," says Mewaldt. "We may now be returning to levels typical of past centuries."

NASA spacecraft will continue to monitor the situation as solar minimum unfolds. Stay tuned for updates.

Email ThisBlogThis!Share to TwitterShare to FacebookShare to Pinterest
Labels: Svensmark