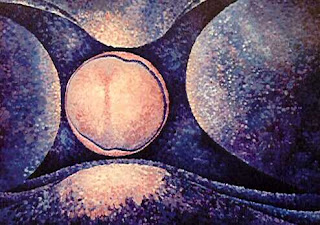 We now are introduced to the mythic tale of Adam and Eve. Yet we are now informed as to the reality of the colonization of Earth after the Pleistocene nonconformity and that the tale of Noah is one such settlement. It is also reasonable that many such settlements would be established around the globe. We are aware that agricultural man sprang up at much the same time at several locales around the earth. It is plausible that many such additional settlements largely failed to take. Noah appears to be the one best written transmittal of that human history that we have.

Such a settlement initiative would entail reconverting space born humans into earth adapted humanity. This also allows for a range of a preselected characteristics to chosen for the settlement location. Thus it is possible that this tale is describing the creation of such settlers.

1 Thus the heavens and the earth were completed in all their vast array.

4 This is the account of the heavens and the earth when they were created.

Man is formed from the elements of matter. Maybe we are talking about an artificial womb and prepared fertilized eggs from the space born.

8 Now the LORD God had planted a garden in the east, in Eden; and there he put the man he had formed. 9 And the LORD God made all kinds of trees grow out of the ground—trees that were pleasing to the eye and good for food. In the middle of the garden were the tree of life and the tree of the knowledge of good and evil.

This new earth human is placed in a garden, perhaps on a space habitat and likely with plenty of the plants he would later experience on earth. Geography begins to be interpolated to quell questions from listeners.

The settlement is obviously in and the audience is been placated. It is conceivable that the initial settlement was deliberately set up near Ararat to ease the transition from space habitation to earth based.

15 The LORD God took the man and put him in the Garden of Eden to work it and take care of it. 16 And the LORD God commanded the man, "You are free to eat from any tree in the garden; 17 but you must not eat from the tree of the knowledge of good and evil, for when you eat of it you will surely die."

The mythic idea of the tree of knowledge is introduced and from that we also are given the mythic expulsion from this cradle. After all, they have been engineered to settle on earth and to commence the terraforming of the planet.

God sets him up to provide a reason for his summary expulsion that he will accept. The settlers must know that there is no return. Although we see one archetype, it is reasonable to presume a good number of settlers were produced with a good range of genetic variability.

18 The LORD God said, "It is not good for the man to be alone. I will make a helper suitable for him."

But for Adam [h] no suitable helper was found. 21 So the LORD God caused the man to fall into a deep sleep; and while he was sleeping, he took one of the man's ribs [i] and closed up the place with flesh. 22 Then the LORD God made a woman from the rib [j] he had taken out of the man, and he brought her to the man.

Cloning takes place to produce the opposite sex in preparation for resettlement.

24 For this reason a man will leave his father and mother and be united to his wife, and they will become one flesh.

25 The man and his wife were both naked, and they felt no shame.

Thus the colonizing group is formed and likely trained, but not introduced to modern luxuries and ideas. They can be safely settled near the headwaters of .

One other aspect of human existence supports the idea of settlement by genetically planned introductory stock. It is the whole issue of the unusual range of racial types distributed about. We have several skin hues including black and white that are bred true.

If I were to tame a particular mammal, it is no trick to breed out a range of colors and solidify them as a breed. It is a real trick to do it by random choice. It simply does not happen.

Thus it was managed in the first place, and what better than to establish a series of settlement operations around the world with their own variety of human being. One benefit, is that after hundreds of generations it is possible to partially trace the degree of interbreeding that has subsequently taken place almost at a glance.