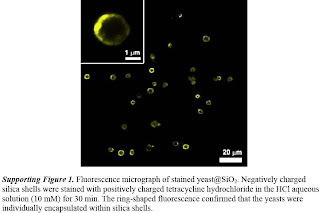 This is an interesting and suggestive development. Last year I posted on the likelihood of some form of biological agent producing a protective coat of calcium carbonate. This would take a long time to properly complete compared to ordinary cellular activity. The analog to this in larger organisms is the sea shell.

This idea was triggered by the possible existence of very small single cell life forms in our blood that possibly are responsible for the presence of elemental calcium in artery walls damaged by arteriosclerosis.

This research is playing directly with silica. It will be interesting to see what they make of it.

Calcium carbonate is likely a better choice in terms of human applications. In the meantime, this may be the beginning of a new drug delivery protocol before we are done. One might engineer a drug producing microbe that is then shielded using this method. On application, the drug would be released slowly as the shells collapsed upon the microbe dying. This could be useful for a range of drugs best supplied slowly.

Korean researchers have coated yeast cells with silica. This could lead to functionalized cells with electrical and computational properties or other properties.

Corante describes the korean research and its implications

They start out by coating the cells with some charged polymers that are known to serve as a good substrate for silication, and then expose the yeast to silicic acid solution. They end up with hard-shell yeast, sort of halfway to being a bizarre sort of diatom.

The encapsulated cells behave rather differently. After thirty days in the cold with no nutrients, the silica-coated yeast is at least three times more viable than wild-type cells (as determined by fluorescent staining). On the other hand, when exposed to a warm nutrient broth, the silica-coated yeast does not divide, as opposed to wild-type yeast, which of course takes off like a rocket under such conditions. They're still alive, but just sitting around - which makes you wonder what signals, exactly, are interrupting mitosis.

This provides a new means to an biological/inorganic interface, a way to stich cell biology and chemical nanotechnology together. If you can layer yeast cells with silica and they survive (and are, in fact, fairly robust), you can imagine gaining more control over the process and extending it to other substances. A layer that could at least partially conduct electricity would be very interesting, as would layers with various-sized pores built into them. The surfaces could be further functionalized with all sorts of other molecules as well for more elaborate experiments.

Yeast wears a silica coat: Various living cells were individually coated with silica using layer-by-layer self-assembly and biomimetic silicification. The viability of yeast cells was found to be enhanced threefold after silica encapsulation, and their cell division could be suppressed by encapsulation.