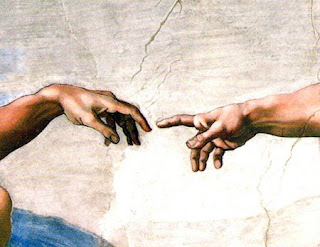 We have recently worked our way through the first several chapters of Genesis through eyes informed by our present understanding of science and our understanding of the Pleistocene nonconformity. This provides us with the outlines of an alternative history for the rise of man during the last ten millennia that is supported by ample evidence independent of the scriptural sources themselves. The scriptures allow us to pencil in detail.

I have already discussed evidence or pointed out additional sources of evidence in my prior postings, so this column will merely list the assertions gained.

Biologically modern man arose at least 70,000 years ago and filled most niches throughout the old world over the next 30,000 years. He was largely untamed, but we have examples in the tribes of the aboriginals in Australia and in Namibia. Other similar groups appear in the tropics. His principal homeland was Africa and the lowlands of Southeast Asia. At this time the continental shelf was fully exposed and presented a moderate marine climate. The bulk of south East Asia was south of the Equator.

More importantly, the Eurasian and North American land mass was dominated by a massive ice cap that maintained a volatile climate in the temperate zone. Mankind penetrated these lands as robust hunter gatherers. Africa was as today as was the bulk of South America. Tropical rainforests dominated Africa, South America (as today) and South East Asia.

Agricultural man arose in these tropical regions and the long cycle of antique civilizations began. This ultimately culminated with the rise of a modern civilization, as early as twenty thousand years ago. Again it was constrained to the extensive continental shelves and tropical regions and was surrounded by agriculturally inhospitable regions due to the climatic volatility brought on by the Ice Age.

In time this civilization mastered science and technology and created a world like ours with all the usual issues. They discovered from modeling that shifting the crust thirty degrees south along the Hudson Bay longitude would end the northern Ice Age stabilize the southern Ice Cap and usher in the Holocene climatic regime we presently enjoy. Very likely, a prior natural crustal shift had occurred to release some of the imbalance of mass between the two ice caps, confirming the possibility.

This civilization had also mastered the art of manufacturing magnetic exclusion craft, providing easy access to space. This is described fully in my article on the reverse engineering of the UFO. This gave mankind an alternative living space in space itself through the creation of space habitats, also described in earlier posts. At some point the decision was made to transition the human population into space habitats likely positioned in the asteroid belt. The process may have taken centuries, yet could have been accomplished in a single generation by ensuring all newborn were genetically adapted for space. ET as presently described is logically a space adapted human being with optical devices expanding the available spectrum.

They initiated the movement of a suitable comet from the Kuiper belt to impact on the northern ice cap at the North Pole in the right direction and location to induce the necessary movement.

Thus when the impact took place, Earth was largely vacated, although many wild tribes in areas of good survivability may well have been left in place, or were certainly immediately returned.

The impact itself filled the atmosphere with carbon dust from the comet and with water vapor from the impact with the ice cap. The shock wave slaughtered animal populations in the north. It likely did rain for forty days if not a lot longer. However, human artifacts were on the continental shelf and the massive tsunamis caused by the shock and crustal movement scoured that clean.

As I have posted earlier. There is no chance that the location of the impact was accidental. This was a real act of terraforming.

With this action completed, it was necessary to introduce mankind back into the biosphere to open up the temperate lands to been tamed by agriculture.

Development groups of specially bred humanity were raised up and prepared and then transported to appropriate valleys on earth with a handy tool kit of seeds and the like to establish a community. The Noah story and the creation of Adam and Eve satisfy this paradigm. This may have happened quickly after the initial devastation. More likely, it happened a great deal later after the climate had largely settled down enough to be easily predictable. It may also have happened many times as specific regions became suitable.

Indian scriptures suggest that it may have happened after the second inundation occurred brought on by the massive release of melt water through Hudson Bay. This would clearly be the last major event derived from the original crustal shift and occurred within a couple of thousands of years of the original event. What makes this compelling is that it necessarily took two thousand years to remove most of the ice and possibly much more. The easy collapses were through and the European ice sheet. These likely happened within the first two thousand years and helped to largely settle the climate. However the balance of the ice may well have lingered for thousands of additional years.

This brings us up to the Holocene era in which modern man has spread out over the past ten millennia and converted much of the globe to agriculture as originally desired.

One other aspect of this account must be commented on. God is not a figure of mystery; he is a living person in charge of the resettlement operation. He is deified later when he is patently not available for an interview. This makes complete sense. The resettlement group was trained in space and then landed with a group of temporary personnel to ease the build out.

So the irony is that the god of genesis is a space born human being sent along to act as project manager. It appears that there was never a spiritual God as the all knowing master of the universe. I suspect, without close reading, that further insertions of god hood need to be carefully thought about. The priesthood had sound reasons for pushing the mystical god.