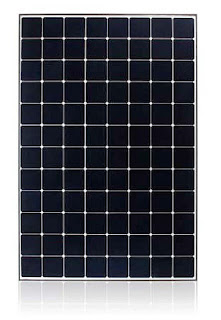 Don‘t you just love vigorous competition at work? Sharp may be breaking performance records for the exotics, but SunPower is breaking performance records for the domestics. Here they can lock in panels with an efficiency of around twenty percent. This is a solid improvement over the fifteen percent benchmark bandied about and certainly starts making the technology attractive.

When you realize that ten percent efficiency is awfully close to zero on a cloudy day, it is real hard to get excited about all that area you are sponging up. At twenty percent, a thirty percent loss is not so catastrophic.

In the meantime we will be seeing a lot more of Nansolar’s printed solar cells likely operating around ten percent and cheap at $1.00 per watt.

Right now efficiency is directly attached to cost per watt. The business strategy is to design a power farm that allows easy panel replacement as new product arrives. That way, the operator can expect to increase his output through the normal replacement cycle.

SunPower has announced that it has produced a world-record, full-sized solar panel with a 20.4 percent total area efficiency. The prototype was successfully developed using funds provided by the U.S. Department of Energy (DOE) under its Solar America Initiative (SAI), which was awarded to SunPower approximately two years ago.

The new 96-cell, 333-watt solar panel is comprised of SunPower's third generation solar cell technology that offers a minimum cell efficiency of 23 percent. In addition, the larger area cells are cut from a 165 mm diameter ingot and include an anti-reflective coating for maximum power generation.

With a total panel area of 1.6 square meters, including the frame, SunPower's 20.4 percent panel achieved the highest efficiency rating of a full sized solar panel and this rating was confirmed by the National Renewable Energy Lab (NREL), an independent testing facility.

"SunPower has the engineering expertise and proven technology to accomplish this remarkable milestone in such a short period of time," said Larry Kazmerski, executive director, science and technology partnerships, located at NREL.

"My colleagues at the DOE and NREL had cautioned me that reaching a 20 percent solar panel was a stretch, but this did not dampen my optimism that it would happen. I congratulate SunPower and its team of talented engineers on realizing this accomplishment."

SunPower expects to make the 20.4 percent efficiency solar panel commercially available within the next 24 months. The company plans to begin operating a U.S. panel manufacturing facility in 2010 using automated equipment designed and commercialized with SAI funding.

"We are excited with the rapid pace in which we've been able to develop these advanced technologies," said Bill Mulligan, SunPower's vice president of technology and development.

"Without the funding from the SAI, it would have taken us much longer to deliver both the world-record 96-cell solar panel and the innovative T5 Solar Roof Tile. We appreciate the DOE's continued support of the solar energy industry."

The Solar America Initiative is focused on accelerating widespread commercialization of clean solar energy technologies by 2015 and to provide the U.S. additional electricity supply options while reducing dependence on fossil fuels and improving the environment.

It aims to achieve market competitiveness for solar electric power through government partnerships with industry, universities, national laboratories, states, and other public entities by funding new research and development activities.