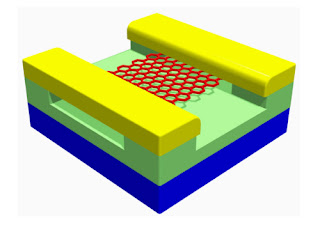 The graphene news just keeps getting better and more exciting. Read through this. A little bit of neat fabrication has given us a device able to measure the weight of a couple of atoms.

Thus we are already making up neat tools with this stuff. The real point here is that complex geometric shapes can be contemplated and ultimately fabricated if justified.

We have already outlined some of the developing aspects of this extraordinary technology. I am still getting over the fact that we can fly continuous nanotubes off a tool to creditably produce the space cable that Arthur C. Clark dreamt of

Can you imagine a battle armor woven with this stuff? The advantage to the armor would surely match that of the original plate of the high middle ages. Likely it can reach the level that the contents would be vaporized before penetration becomes an issue. It would also be very light and obviously impervious to wear.

This is surely the most important materials discovery made ever. As we become more adept at producing it and working with it, we can expect it to possibly displace most other materials including metals. The main factor will be cost, but this promises to get cheap fast.

Particularly when the labs have been producing it for their work by the expedient of applying scotch tape to a chunk of graphite, which is quite enough to make you chuckle.

Researchers at Columbia University in New York have made the first electrical-readout nanomechanical resonators made from graphene. The devices, which consist of vibrating sheets of graphene suspended over micron-sized trenches, could be used as highly sensitive, robust, mass detectors.

Graphene sheets are sheets of carbon that are just one atom thick. As well as having remarkable electronic properties, graphene is extremely stiff and strong. This means that the material can be made into bridge-like resonators that vibrate at very high frequencies. Because such a resonator has an extremely small mass, its resonant frequency changes each time a molecule is adsorbed onto its surface.

"Although graphene shares these advantages with carbon nanotubes, which have also been used to make highly sensitive mass detectors, it has the added bonus of being a 2D sheet that we can 'carve' into the shapes we want," explained team leader James Hone. "This gives us more control over the properties of the finished resonators."

The Columbia team made its devices by placing graphene sheets onto silicon/silica substrates, then patterning metal electrodes and etching away the silica to produce suspended graphene. The portion of each electrode that is in contact with the graphene is also suspended, which makes electrical readout easier later on.

The devices vibrate at megahertz frequencies, with a peak around 65 MHz that depends on the device geometry. The frequency can also be adjusted with a DC voltage applied to the gate, which introduces tension to the sheet. When an object is placed on the device, the frequency changes – and the change is detected with the electrodes, and used to calculate the mass of the molecule.

"Our measurements indicate that the devices should be sensitive to around 1 zeptogram (10–21g), which is about two gold atoms, at low temperatures" Hone told our sister website nanotechweb. "They also show that the response is not as simple as expected because placing material on the graphene changes both the mass of the sheet and its tension – a new phenomenon that has never been seen before."

The team is now experimenting with different geometries for the devices and looking at various readout techniques that will improve their performance.

The work was published in Nature Nanotechnology.

Email ThisBlogThis!Share to TwitterShare to FacebookShare to Pinterest
Labels: Nanotubes