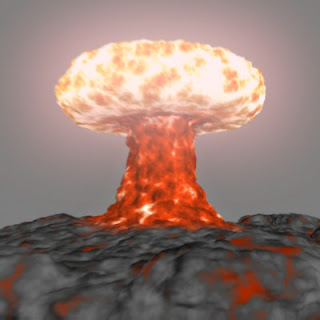 Most press interest with this issue has focused on the prospects of a terrorist cell gaining access to a nuclear bomb, an admittedly difficult trick, requiring the resources of a state, despite tales of seventeen year old bomb designers. For a whole range of reasons, a nuclear bomb been delivered into a city is a difficult and unlikely undertaking even if supplied by Iran. However, if one is prepared to spend enough money, anything becomes possible.

Thus the first line of defense must be meticulous monitoring of the flow of large money around obvious hot spots. Please note that I am not making suggestions as to points of interest for the obvious reason. The problem is that it is much too easy. Fortunately, it is also fairly easy to monitor significant large cash movements.

So I am not losing any sleep over the prospects of a nuclear blast in a city anytime soon. It is still a state prerogative and subject to catastrophic sanctions.

Having said that, we discover that the whack crowd is trying to exploit biological killers in order to push their agenda of religious genocide.

The first difficulty that you run into is just what these guys in the Algerian desert learned. You need costly laboratory facilities and a slew of skillful staff. That is pretty hard to pull off even when you are a legitimate operator. I can believe one rogue lab technician can be recruited, but not a team of several. Thus the equipment must be monitored and maintained by clumsy untrained rookies. Someone is going to drop something and break it and kill forty not so innocent bystanders.

However, if you can get that far so that you have a deliverable weapon then the weapon is naturally deliverable by been compact and easily disguised. This has always been the scary part of the biological story. It is easy to imagine a successful attack.

What this report shows is that bad guys are actually trying to make it work.

The only defense is excellent intelligence work because this will remain out of the hands of amateurs and rookies. Thus tracking all key constituents is a security priority.

Current Status of Terrorists and WMDs and Nuclear Facilities

From Pajamas Media: “What’s going to happen if al-Qaeda gets their hands on WMD?”

“They already have,” the defense contractor said. Then he told the story of how, just last January, al-Qaeda in the Islamic Maghreb (AQIM) had bungled a WMD experiment using bubonic plague.

From the Telegraph and other sources around Jan 19, 2009: A group of 40 terrorists were reported to have been killed by the plague at a training camp in Algeria earlier this month.

An al-Qaeda cell killed by the Black Death may have been developing biological weapons when it was infected, it has been reported.

Dr Igor Khrupinov, a biological weapons expert at Georgia University, told The Sun: "Al-Qaeda is known to experiment with biological weapons. And this group has direct communication with other cells around the world.

"Contagious diseases, like ebola and anthrax, occur in northern Africa. It makes sense that people are trying to use them against Western governments."

Dr Khrupinov, who was once a weapons adviser to the Soviet president Mikhail Gorbachev, added: "Instead of using bombs, people with infectious diseases could be walking through cities."

From the Times Online: A French physicist with the European atomic research centre near Geneva was charged with terrorism offences by a Paris judge last night after investigators said that he offered to work with the North African branch of al-Qaeda.

Adlène Hicheur, 32, who is of Algerian origin, was arrested last week with his younger brother after intelligence agents intercepted his alleged internet contacts with al-Qaeda in the Islamic Maghreb.

The physicist, who works at the giant atomic collider at CERN (European Organisation for Nuclear Research), which straddles Swiss and French territory, told the Islamic group that he was interested in committing an attack but had not begun any material preparation, according to police sources. He had acknowledged contacting the militant organisation, they said.

Terrorists would find it "relatively easy" to launch a devastating attack using swarms of insects to spread a deadly disease, an academic has warned.

Jeffrey Lockwood, professor of entomology at Wyoming University and author of Six-legged Soldiers: Using Insects as Weapons of War, said such Rift Valley Fever or other diseases could be transported into a country by a terrorist with a suitcase.

An 11 page pdf study form 2003: Terrorist Motivations for Chemical and Biological Weapons Use: Placing the Threat in Context

Defense against bioterrorism involves several factors: intelligence to disrupt the terrorists before they can use the weapons, early detection, availability of protective antibiotics, and vaccination of selected populations (eg, the military).