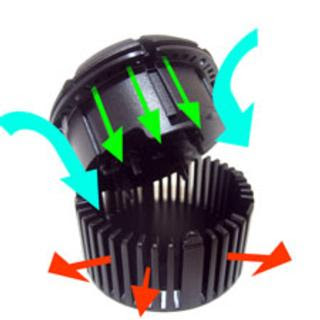 The simple idea of using a speaker like device to inject bullets of air onto cooling surfaces is long overdue in the world of chips. Valving the air is likely a problem also but it would jump the cooling efficiency.

The heat sink has always been a passive chunk of metal. Designing it to channel air flow onto the active components is a handy improvement and should go a long way to make LED systems last a lot longer.

In a way this has finally come about because of the growing size of LED devices. The heat sink has gotten in the way and is now a bottle neck.

Light-emitting diodes generate much less heat than traditional lightbulbs, but the heat they do radiate makes them dimmer and cuts short their life spans

TO COOL: Nuventix's SynJet technology is an example of a system that can be used to cool light-emitting diode (LEDs) lighting fixtures, without the need for a fan. When heat isn't removed from LEDs, longevity and performance suffer. © NUVENTIX, INC.

Light-emitting diodes (LEDs) really shine as an energy-efficient, long-lasting source of illumination in sensors, flashlights and video screens. For larger and more powerful LEDs to succeed in replacing incandescent and fluorescent bulbs in home and industrial lighting, however, they must be designed to better keep their cool.

Heat is the great enemy of LEDs. Because LEDs do not emit heat as infrared radiation like incandescent or fluorescent bulbs do, it must be removed from the device by conduction or convection. If an LED system does not have an effective way of getting rid of excess heat, rising temperatures will damage LED components, dimming the light and curtailing its lifetime, according to the U.S. Department of Energy.

The incandescent and fluorescent bulbs commonly sold today use a lot more electricity than do LEDs, but they are also better at shedding heat, says Christian Wetzel, an associate physics professor at Rensselaer Polytechnic Institute in Troy, N.Y. "LEDs may generate less heat," he adds, "but it still needs to be removed."

The norm for cooling an LED (which is actually a semiconductor that converts electricity into light) has been to place a copper or aluminum tube near the light to act as a heat sink and draw away excess heat. Another option has been to build a fan into the lighting system that can dissipate warmed air. A third idea that is gaining traction promises to remove heat more aggressively than metal tubes and more efficiently and quietly than fans: a pump uses an oscillating diaphragm to quickly push jets of air over the source of the heat.

"The way we attack the problem is not like the way a fan does by blowing as much air as you can through a system," says Mick Wilcox, director of marketing for Nuventix, Inc., the Austin, Tex., maker of SynJet, a synthetic jet technology that features a diaphragm that moves up and down when voltage is applied. "We use an electromagnetic approach very much like a speaker. SynJet's nozzles can be placed within a millimeter or two from the heat sink."

When SynJet's diaphragm moves, each pulse creates a "bullet" of air, Wilcox says. Because SynJet's airflow is more thermally efficient, less air is needed to provide cooling and the system as a whole makes less noise than a fan does, he says.

Philips Lighting has begun designing Nuventix's technology into its high-power LED lighting systems as an active cooling source. "Prior to SynJet, cooling was done passively, meaning with a bulky piece of aluminum, typically two to three times the size of the SynJet," says Geert van der Meer, Philips Lighting's global product marketing director for solid-state lighting (which includes LEDs). Philips's line of Fortimo powerful LED lights relies on active cooling because these lights are typically installed in a ceiling, which means there is very little available air space to provide ambient cooling, he adds. "Forced cooling is therefore a very attractive solution, especially for designs where quite some power needs to be cooled away."

Nuventix's technology comes at a price, of course. SynJet adds about 10 percent to the cost of the lighting unit, van der Meer says. "Philips has investigated multiple alternatives, like fans," he adds. "From a cost perspective, some alternatives look cheaper, but their reliability is not as good as SynJet, as most other technolog[ies] attract dirt over time, then become noisy and ultimately fail."

A technology such as SynJet could prove to be an attractive cooling option for LEDs, because it seems to work with any standard heat sink, Wetzel says. It remains to be seen, however, he adds, whether the diaphragm's movement can provide coughs of air that are powerful enough to reach all the areas that need to be cooled.