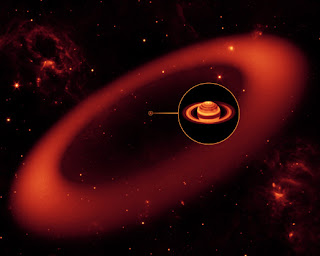 This is a highly unexpected result. Who would imagine something quite so big waiting to be discovered circling Saturn. One expects surprises chasing around elsewhere but not quite here.

It is obviously huge and shows how isolated Saturn must be from disturbance of any kind that could eliminate such a ring. I would have thought that Jupiter would make it difficult to sustain, but my sense of the spatial arrangements are obviously in need of reappraisal. Oh well, it is still a nice picture.

We are very much in an era in which we will be digging up almost all of the big secrets of the solar system. A wide range of new sensing equipment is been deployed and there will be a lot of low hanging fruit to capture. There is also a lot of space to map so it will take along time, but we are well started.

"This is one supersized ring," says Anne Verbiscer, an astronomer at the University of Virginia, Charlottesville. "If you could see the ring in the night sky, it would span the width of two full Moons."

Above: An artist's concept of the newly-discovered infrared ring around Saturn.

The new belt lies at the far reaches of the Saturnian system, with an orbit tilted 27 degrees from the main ring plane. The bulk of its material starts about six million kilometers (3.7 million miles) away from the planet and extends outward roughly another 12 million kilometers (7.4 million miles). It would take about one billion Earths stacked together to fill the voluminous ring. One of Saturn's farthest moons, Phoebe, circles within the newfound ring, and is likely the source of its material.

The ring is tenuous, consisting of widely-dispersed particles of ice and dust. Spitzer's infrared eyes were able to spot the glow of the cool dust, which has a temperature of only about 80 Kelvin (minus 316 degrees Fahrenheit).

The discovery may help solve an age-old riddle of one of Saturn's moons. Iapetus has a strange appearance — one side is bright and the other is really dark, in a pattern that resembles the yin-yang symbol. The astronomer Giovanni Cassini first spotted the moon in 1671, and years later figured out it has a dark side, now named Cassini Regio in his honor.

Saturn's supersized ring could explain how Cassini Regio came to be so dark. The ring is circling in the same direction as Phoebe, while Iapetus, the other rings and most of Saturn's moons are all going the opposite way. According to the scientists, some of the dark and dusty material from the outer ring moves inward toward Iapetus, slamming the icy moon like bugs on a windshield.

"Astronomers have long suspected that there is a connection between Saturn's outer moon Phoebe and the dark material on Iapetus," said Hamilton. "This new ring provides [the missing link]."

Verbiscer and colleagues used Spitzer's longer-wavelength infrared camera, called the multiband imaging photometer, to scan through a patch of sky far from Saturn and a bit inside Phoebe's orbit. The astronomers had a hunch that Phoebe might be circling around in a belt of dust and, sure enough, when the scientists took a first look at their Spitzer data, a band of dust jumped out.

The ring would be difficult to see with visible-light telescopes. The relatively small numbers of particles in the ring wouldn't reflect much visible light, especially out at Saturn where sunlight is weak.

"The particles are so far apart that if you were to stand in the ring, you wouldn't even know it," said Verbiscer. "By focusing on the glow of the ring's cool dust, Spitzer made it easy to find."

For additional images relating to the ring discovery and more information about Spitzer, visit http://www.spitzer.caltech.edu.