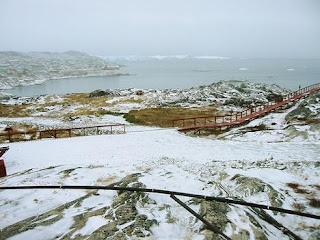 The number quoted in the headline is rather surprising, but the text brings it back down to a more convincing 10 to 15%. This is still surprising. Natural land based CO2 sequestration happens in the Arctic and also in peat bogs or swamps world wide where oxygen is squeezed out of the decaying biomass.
Everywhere else CO2 is tied up in the living biomass but is recycling usually over a centuries. Recall that most carbon is tied up in soils and wood.
So besides the oceans absorbing CO2 and converting it into limestone for instance, land uses these two mechanisms to lock up surplus CO2.
I have already posted that the source of increasing CO2 in a post warming world was permafrost carbon release. We now understand that the Holocene is in the business of seeing off the remnants of the ice age. We can therefore anticipate that over the next 10,000 years, that at some point a warming climate will be able to actually warm the Arctic enough to provide a warm enough climate to allow the permafrost to even disappear. I think it is barely possible once the Sahara is fully reforested.
Such a world will likely transfer that permafrost carbon to that forest.
The take home lesson is that a warming climate is a natural generator of CO2 surplus to the biome’s ability to quickly absorb it. The warmer it gets, the more CO2 we will have to deal with.
Of course, this suggests that if the greenhouse gas theory has credence, then any greenhouse warming will have a huge multiplier effect. In short, an increase in anthropogenic CO2 causes an increment of global warming which then causes a major increment of CO2 release in the Arctic, which then causes an additional increase in global warming.
The good news is that if any such effect is real its magnitude continues to shrink as we better understand the various factors.
In fact we can make a rather important statement. This is a runaway feedback process. Once underway it must run to exhaustion until almost all the available CO2 is stripped from the Arctic. This also means that it could have been triggered many times by large volcanic CO2 release. I do not think that the geology quite supports such a scenario.
Therefore, geological work may be able to place upper bounds on the CO2 greenhouse effect that are much lower than presently been accepted.
In short, the tools exist that may make it possible to even outright disprove the CO2 hypothesis or come so close in terms of an upper bound as to render it meaningless.

Oct 15, 2009
Arctic now traps 25 percent of world's carbon – but that could change
The arctic could potentially alter the Earth's climate by becoming a possible source of global atmospheric carbon dioxide. The arctic now traps or absorbs up to 25 percent of this gas but climate change could alter that amount, according to a study published in the November issue of Ecological Monographs.
In their review paper, David McGuire of the U.S. Geological Survey and the University of Alaska at Fairbanks and his colleagues show that the Arctic has been a carbon sink since the end of the last Ice Age, which has recently accounted for between zero and 25 percent, or up to about 800 million metric tons, of the global carbon sink. On average, says McGuire, the Arctic accounts for 10–15 percent of the Earth's carbon sink. But the rapid rate of climate change in the Arctic – about twice that of lower latitudes – could eliminate the sink and instead, possibly make the Arctic a source of carbon dioxide.
"This study is another example of the important role played by USGS and its partners in providing the scientific research that must be the backbone of any actions related to climate change," said Secretary of the Interior Ken Salazar.
Carbon generally enters the oceans and land masses of the Arctic from the atmosphere and largely accumulates in permafrost, the frozen layer of soil underneath the land's surface.

Unlike active soils, permafrost does not decompose its carbon; thus, the carbon becomes trapped in the frozen soil. Cold conditions at the surface have also slowed the rate of organic matter decomposition, McGuire says, allowing Arctic carbon accumulation to exceed its release.
But recent warming trends could change this balance. Warmer temperatures can accelerate the rate of surface organic matter decomposition, releasing more carbon dioxide into the atmosphere. Of greater concern, says McGuire, is that the permafrost has begun to thaw, exposing previously frozen soil to decomposition and erosion. These changes could reverse the historical role of the Arctic as a sink for carbon dioxide.
"In the short term, warming temperatures could release more Arctic carbon to the atmosphere," says McGuire. "And with permafrost thawing, there will be more available carbon to release."
On the scale of a few decades, the thawing permafrost could also result in a more waterlogged Arctic, says McGuire, a situation that could encourage the activity of methane-producing organisms. Currently, the Arctic is a substantial source of methane to the atmosphere: as much as 50 million metric tons of methane are released per year, in comparison to the 400 million metric tons of carbon dioxide the Arctic stores yearly. But methane is a very potent greenhouse gas – about 23 times more effective at trapping heat than carbon dioxide on a 100-year time scale. If the release of Arctic methane accelerates, global warming could increase at much faster rates.
"We don't understand methane very well, and its releases to the atmosphere are more episodic than the exchanges of carbon dioxide with the atmosphere," says McGuire. "It's important to pay attention to methane dynamics because of methane's substantial potential to accelerate global warming."
But uncertainties still abound about the response of the Arctic system to climate change. For example, the authors write, global warming may produce longer growing seasons that promote plant photosynthesis, which removes carbon dioxide from the atmosphere. Also, the expansion of shrubs in tundra and the movement of treeline northward could sequester more carbon in vegetation. However, increasingly dry conditions may counteract and overcome these effects. Similarly, dry conditions can lead to increased fire prevalence, releasing even more carbon.
McGuire contends that only specific regional studies can determine which areas are likely to experience changes in response to climate change.
"If the response of the arctic carbon cycle to climate change results in substantial net releases of greenhouse gases, this could compromise proposed mitigation efforts for controlling the carbon cycle," he says.
The article, Sensitivity of the Carbon Cycle in the Arctic to Climate Change, was published online today in Ecological Monographs. The coordinating lead author is David McGuire, USGS, and the co-authors include internationally renowned scientists from Canada, Germany, Sweden, and the United States. This study was sponsored by the Arctic Monitoring and Assessment Program, the Climate in the Cryosphere Program, and the International Arctic Science Committee.
Posted by arclein at 10:33 AM