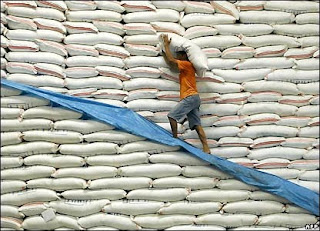 The usual shortage concerns are hauled out and can be broadly ignored. Rice has been hit again by weak monsoons in India. This is a recurring event and stockpiles have been maintained to prepare for it. These are depleted more than liked.

I expect a couple of years of stockpile rebuilding by the growers taking advantage of good prices followed by a surplus year or two that fills all the bins.

These reports tend to be alarmist long before any particular need. There is just too much elasticity in supply. Farmers can grow more if only by adopting expensive hybrids paid for through higher prices. Last year was the first response year to shortages, so this coming year should see crop production optimized.

We sure are a long way from been concerned. We live in a world in which shiploads of food can be dispatched anywhere to make up local shortfalls. Thanks to advancing modern growing methods and this ability to shift sufficient grains to offset local problems, famine is close to technically impossible, except in isolated locales in which war is endemic and regular truck traffic is cut off.

Over the long term, as I have posted here, two billion subsistence farmers can homestead formerly agriculturally barren soils using my corn biochar protocol, initially feeding their families and soon providing a surplus.

Global rice stockpiles have plummeted because of poor crop yields, raising fears of upheaval in international grain markets ahead of the World Food in the Italian capital next month.

Sharp increases in rice prices since last year have hit consumers across the world, especially in Asia and the , the Food and Agriculture Organization said. Whole communities depend on the grain as their staple food or as an important ingredient, as in Asian American communities.

Amid warnings of another surge in rice prices, after the runaway inflation triggered by shortages or export cuts in 2008, FAO experts are citing sharp reductions in the stockpiles of the grain held by the five leading exporters -- the United States, Vietnam, Thailand, Pakistan and India.

Concepcion Calpe, a senior FAO economist, said stocks held by the five major exporters are forecast to plunge by a third to the lowest level in five years, and below last year, when prices rose amid declining inventories.

Total stockpiles held by the United States, Vietnam, Thailand, Pakistan and India are estimated to have fallen to about 20 million metric tons at the end of the marketing year on Sept. 30, from 30 million tons a year earlier. attributed the drop to lower-than-forecast crops and rising demand for imports, amid fears of impending shortages.

In , hit by the weakest monsoon in at least seven years, rice production could drop by about 18 percent, said. Further damage to Indian rice yields may occur as southern grapples with effects of floods.

The last time stockpiles of the five major exporters fell by a third was in 2002-2003, partly because of a bad monsoon in .

Although rice farmers responded to higher prices -- up to $25.07 for 100 pounds at their peak -- and boosted production, those increases were not enough to replenish the stockpiles.

In the United States, the rice price outlook was further complicated because at last a third of rice consumed in the country is imported even as American rice exports reach developed and developing countries across the world.

However, she warned, the impact of El Nino could affect the outlook because the adverse weather phenomenon can delay rains in Asia but unleash floods in South America.

The worsening rice outlook comes amid FAO projections that very large investments are needed to feed the world's population, which is likely to exceed 9 billion by 2050. The FAO says the population growth and changing diets mean that global food production will need to increase 70 percent by 2050.

FAO said, "In the first half of this century, as the world's population grows to around 9 billion, global demand for food, feed and fibre will nearly double while, increasingly, crops may also be used for bioenergy and other industrial purposes."

As urbanization grows, new technologies will be needed to make up for shortfalls in land and farming skills, FAO said, indicating the required funding could run into tens of billions of dollars.