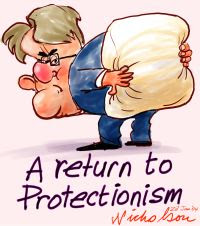 The political lobby for protectionism is naturally capricious. Thus we have had the economic insanity of the lumber battle which was paid for by American home buyers. It cost the American lumber industry little more than chump change to keep the war going and when they settled, the government was forced to give back a lot of money collected on their so called arguments.

Here the tire industry is playing the same game and making their industry central to US Chinese relations. I guarantee you that henceforth, the president will no longer be discussing human rights in when he meets with their president, but the price of tires.

During the two decades or more of the lumber dispute every high level meeting was framed by the dispute and press drumming for progress. This cost the dearly in terms of prestige and respect.

Obama has fallen into the same trap because his natural inclination is to follow the economic nostrums of the left, however false they have long since proven to be. The best thing he could do on this issue is to give the parties a proper forum for hearing their arguments and then impose a time limit on all remedies.

The enemy of free trade will always be associations attempting to use political leverage to create a valuable monopoly. This usually happens when a monopoly based on ready access to capital is threatened by someone with as easy access to capital. The Japanese auto industry solved their problem by the expedient of building factories in as did Michelin a few years earlier. The tire trade is no stranger to protection games.

The needs to be much more aggressive in demanding equal access to exporter’s markets. This has hardly been a real problem in , but a real problem when dealing with most other countries. is choked with protective barriers as is .

I personally think that simply disposing of all such barriers and demanding good citizenship from participants will create a booming economy. I do not think Honk Kong had much else.

Free Trade Is a Boon to the Environment

This article appeared on RealClearMarkets.com on October 8, 2009.

If summitry was a sure predictor of activity, then climate change would be heading towards a golden era. The UN climate summit on Tuesday and the G-20 summit that just wrapped up in Pittsburgh both attempted to relight the dying embers of hope that the December climate meeting in Copenhagen can lead to a successor agreement to the Kyoto Protocol, due to expire in 2012.

If the G-20 leaders really want to demonstrate commitment to action on climate change, they would do well to be more careful about sticking to their commitments when it comes to open international trade.

Many lofty sentiments were displayed at both events. UN Secretary General Ban Ki-Moon announced that the world is "one step closer" to a climate change deal. But he declined, of course, to point out that this particular journey of a thousand miles looks increasingly precarious and that one step is nowhere near enough progress for those hoping for a final deal in December.

Protectionism in the name of climate change carries little upside and much risk, for the environment and for the global economy.

The new Japanese Prime Minister made nice with his colleagues by reaffirming his vow to reduce his country's emissions to 25% below 1990 levels by 2020. 's President Hu Jintao only went so far as to promise his country would reduce emissions by a "notable" margin, but at least sounded receptive to emissions reduction efforts. President Obama gave yet another eloquent speech, which though short on specifics, conveyed that the accepted responsibility for past damage, while continuing to insist on efforts from "rapidly-growing developing nations."

On trade, the G-20 will no doubt pledge to work hard to complete the round of multilateral trade negotiations by 2010, and to keep trade open in the meantime. Unfortunately,its record in this area is not great.

The governing body has consistently, if hypocritically in view of its subsequent actions, issued statements emphasizing the importance of avoiding protectionism amid a global financial crisis, only to have its members do the opposite. Too often the temptation among G-20 countries to subsidize and protect their own has proven too great to resist.

The political tension between protection-seeking domestic constituencies and those in favor of more open trade is beginning to appear in the climate change debate. Importantly, the free flow of goods and environmental soundness are not necessarily at odds.

Indeed, because trade leads to wealth, and wealth to an increased desire and ability to protect the environment, the two are complementary. Nonetheless, many G-20 leaders are doing their best to set them up as being inalterably opposed. President Sarkozy earlier this month became the latest politician to call for carbon tariffs to "level the playing field" for French products that will attract a carbon tax and yet compete with untaxed imports.

Similar sentiments are held among certain politicians too. Senators from manufacturing states crucial to securing passage of a climate bill have repeatedly insisted that their support depends on protection for vulnerable domestic industries. They continue to argue that Chinese imports are threatening U.S. jobs in energy intensive industries, even though more than two-thirds of those types of products come from other similarly rich (and, in some cases, greener) countries.

President Obama spoke out against punitive trade measures inserted into the House bill when it passed in June, but declined to say whether he would veto a final bill if it contained the same elements. He has demonstrated little willingness to resist the siren song of protectionism, judging from his actions on trade since assuming the presidency. He also displayed a lack of appreciation for the foreign policy implications of protectionism in announcing tariffs on Chinese tires just prior to a climate summit where the country's cooperation was considered crucial.

Alienating the Chinese by threatening them with trade barriers would be a big mistake. And considering that the accounts for less than one percent of the market for Chinese energy-intensive goods as is, tariffs would create even less of an incentive among producers to clean up their production techniques for what would be a shrinking market. What they will do is increase the costs of producers who use Chinese inputs, and ultimately, of consumers.

Protectionism in the name of climate change carries little upside and much risk, for the environment and for the global economy. Leaders who care about either or both goals should start fulfilling their own pledges on open trade.