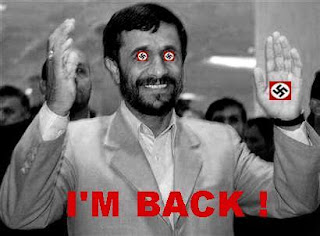 The modern world has lived with the presence of radical Islam now for eight years, or since 9/11. Radical Islam has always found its adherents, but prior to 9/11, it did not impact of the modern world at all. Of course, and fought a bloody war during the eighties and the rest of us sat on the sidelines and watched. There was little else we could do except to provide material support to a preferred side. That war could only end with exhaustion and it did. And it all happened in the Islamic world, as have hundreds of little wars over the past thirteen centuries of Islam.

Islam has failed to ever organize a monolithic Islamic union even like the . In fact, Islam is a pot of conflicted populations who often have almost nothing in common except Islam. This was once an excellent way to describe Christendom. Yet today, that same Christendom has learned to find ways in which differences are accepted and are never allowed to dominate the relationships. Islam lacks a convincing moral center and remains as disunited as when it was founded. In that regard it is the natural successor of all antique empires.

For a variety of reasons a minority radicalized interpretation of Islam has emerged and has been marketed to the vulnerable. It is simplistic and meant to principally support the jihadist fantasy worldview. The vast corpus of Islamic scholarship has no value or even the slightest glimmering of understanding in this world. Just as Nazi theology was based on a fanciful interpretation of German paganism, jihadist theology is also based on the pagan background to Mohammed’s revelations.

This mythic dream has sold well on the Arab street, as did the dreams of Nazism in prewar . As a dream, the fundamental contradictions remain in the shadows and adherents can proceed with the task of building the movement. This had gone well enough until 9/11. 9/11 then informed the prospective victims of the nature of their mortal enemy and the battle was joined. Today the movement is painfully dying, as it is confronted again and again.

Presently the movement subsists on handouts from their followers on the Arab street and their ability to tax the opium crop of . has now attacked them in their strongest base and is clearly determined to destroy them. On the Afghan side, the military buildup continues apace. The Afghan Army is hugely better and will soon be carrying the bulk of the fight. Allied forces are also continuing to expand and be strengthened by a build up.

Taliban strategy has fallen back to a distributed small packet presence making concentration of force impractical. It does support the inflicting of small losses indefinitely over huge geographical areas. Imagine been at war with the , and planting a combat section of ten men in every major city and that is it. This will result in lots of headlines but scant material damage.

Today, it appears that Islamic regime tolerance of these folks is ending and a concentrated drive is developing to exterminate them wherever found. The global core is in the middle of the present fighting.

Other centers exist, and that must also include for the time been. The pressure will continue unabated until radical Islam disappears, however long it takes.

Is radical Islam really dying or spreading right under our noses? For years, history ignoramus Western govts. have been allowing mass Muslim immigration, then acting surprised that they bring horrible Sharia law with them.

In this day and age to continue to remain an Islam history ignoramus is getting dangerous. Never fear, you can now learn the key facts of the rise and spread of Islam over the last 1400 years fast free and accurate from the Historyscoper. Just click http://go.to/islamhistory

It is something to contemplate that Mien Kampf was inspired by the Koran, or that at least is how libel goes and it may even be valid.

Today they are been attacked outright by the Pakistani government, the resurgent Afghan goverment and whoever else is available.

Only hitler managed to make so many enemies.

This will not destroy islam, nor end the appearence of savages happy to latch on to the more barbaric aspects of the koran.

What is dying is any semblence of a supra governmental military force dedicated to jihad.

This is happening through casulties and the peasent's modern TV burying his dead.

It unfortunately takes years, but we have already spent years