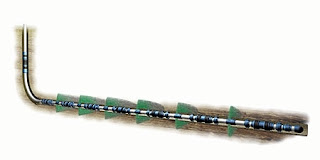 With sixty plus packers coming on line, any major resource now can be retested for productivity. A huge amount of previously stranded oil is now becoming accessible. It will not readily displace conventional oil production but it will certainly augment dwindling supplies on a timely basis. Note that with the huge drilling expense we have only 50,000 barrels per day.

At least we know that this can be duplicated many times in the USA, but it will not be cheap.

I do not know what the true resource figure is for the USA. There have always been oil bearing sediments that had many horizons holding oil but were also too thin to bother with. Usually the problem was thinness. With horizontal drilling, multiple packers and dropping costs, most of this warrants a fresh look see because we are able to thread a production well practically along the foot wall, while using indirect methods to measure local thickness. We are most of the way there actually to fully map a target and understand its contents.

The true resource of oil in Western Canada is likely well over two trillion barrels and climbing. This technology is able to at least look at any of it, in case there is some way to get at it and remove it.

What are the limits of multi-frac horizontal technology? As producers expand its geographic and geological boundaries, Packers Plus continues to push the technical envelope. In August, the company said it successfully ran a 20-stage Bakken frac for Petrobank. Announced less than two months ago, that milestone is already history. Packers Plus is already doing up to 32-stage fracs for Bakken clients in the U.S., and even that astonishing record will soon bite the dust, said Themig. "We're very close to release of a second-generation HD system that potentially will give us over 60 fracs."

After , Montney and natural gas successes, the technology's biggest Canadian achievement has been the Bakken tight oil play in southeastern . From negligible production at mid-decade, Bakken output soared to a record 58,000 bbls a day early this year before slipping below 50,000 bbls a day by mid-year. (At 50,000 bbls a day from about 1,150 wells, Bakken production averages about 44 bbls of oil per well. The best wells exceed 200 bbls a day.) The drop in Bakken production had nothing to do with reservoir deliverability. Shrinking corporate cash flow and reduced access to financing constrained drilling after the September 2008 global financial crash. So output fell as new wells failed to keep up with natural declines.

The government official believes Bakken light oil would still be economic even if world oil prices fell below $40 () a bbl. Thermal oilsands projects -- which use capital-intensive surface facilities and huge volumes of gas to produce bitumen, which has to be upgraded -- are considered economic at $60 () a bbl.

The biggest potential prize is locked in the Cardium formation. Spread over several fields, the Cardium's initial oil in-place oil is almost a quarter of the total in the , according to the Geological Survey’s geological atlas of the WCSB.

Operators are taking either of two approaches. Some are using multi-frac horizontals on the edges of the field in virgin reservoir that was too thin or too tight to produce from vertical wells.