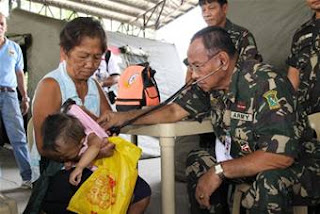 I have always felt that disaster relief was a primary military responsibility. To start with, it primary mission is to inflict a disaster on a target population. What goes with that is the mitigation of that same disaster. As a result, all personnel are trained to handle both roles or should be.

Thus the onset of a natural disaster finds the military with the men and transport in place and able to move immediately. Preparatory training fits well with normal training needs. Recall that during the late fifties, during the height of the atomic bomb panic, the military established a full blown civil defense program that integrated all large communities. It was not just bomb shelters, although few of those were ever built.

Much more important, many got basic training in evacuation of the injured from damaged property. A real disaster is not a case of a large building going up in flames, or been knocked down. It is a case of many buildings been severely damaged far beyond the capacity of so called first responders.

The military has thousands of individuals who can immediately step up to solve the problems and also train civilians in support tasks as needed. The military also has authority to impose law as needed.

This has always been obvious and why it has never been fully embraced, escapes me. The military spends all its time preparing to fight a war, which rarely occurs. A natural disaster is a war and is best treated as such.

In quake-hit , the flooded and typhoon-ravaged , troops are evacuating the wounded and stranded, distributing food and medicines -- and gaining the public's admiration.

As countries across Southeast Asia clean up and count the dead following a series of devastating natural disasters, the militaries engaged in relief work have seized the moment to burnish their sometimes questionable images.

"In those countries where the military takes an active role, it gives it a positive image," Bob Broadfoot, head of the Hong Kong-based Political and Economic Risk Consultancy, told AFP.

He singled out the military in , where thousands may have been killed in Wednesday's 7.6-magnitude earthquake on island.

Troops have been deployed to work on evacuation and rescue efforts, and medical aid has been sent. The military also plans to send several ships carrying construction equipment for eventual reconstruction efforts.

's armed forces stood accused of rampant rights abuses during the rule of late former dictator Suharto -- but emergency aid efforts such as the one focused on the West Sumatra capital change the equation, observers say.

"The military in is assuming a higher profile after having lost a lot of face at the end of the Suharto years," Broadfoot said.

"I would imagine this would help it restore its credentials as a positive force as opposed to just a negative force."

Arbi Sanit, a political analyst at the of in , agreed.

"Of course the impact is positive on the Indonesian military when they assist the disaster victims. People will be even fonder of the military," Sanit said.

Authorities in have deployed tens of thousands of soldiers and police to help victims of Typhoon Ketsana, which cut a path of destruction through the and then struck , , and .

More than 450 people have been killed so far by the powerful storm and subsequent flooding, and millions more affected.

Jean-Pierre Cabestan, a professor of political science at , said that often in poorer countries, the military was the only institution capable of getting quick results.

Le Minh Nhat, deputy director of the regional disaster relief committee for central , based in Danang, said: "Thanks to the army's help, we were able to save hundreds of people."

In the , the military -- accused in recent years of a wave of extrajudicial killings -- has played a leading role in rescue and relief work following floods caused by Ketsana, with 3,000 soldiers deployed.

Officers told AFP they were glad their service members were getting due credit.

"Now, they are seeing another side of the armed forces of the Philippines, not just involved in combat operations but in non-combat operations as well," military spokesman Colonel Romeo Brawner said.

"The image of the armed forces is gradually improving, not only in rescue but also in being an institution working for peace."

An officer with the 51st Engineering Brigade working in town east of the capital said his contingent had been stretched thin helping in the relief effort but was still working hard.

"We have always been criticized in the media for human right abuses, but look at my soldiers, they are making a lot of sacrifice," he said, pointing to troops wading in ankle-high mud to clean debris from a roadside.

"They have not had lunch yet."