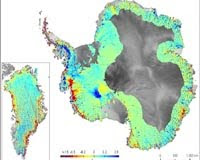 This is certainly thought provoking. For a specific period of time glacial movement accelerated and helped reduce the thickness of the two ice caps. I do not know now significant this all was in terms of overall mass, and perhaps it was part of a simple cycle of ice removal.

Normally such movement removes very little and represents a necessary adjustment. A glacier is dynamic after all.

More curious to my way of thinking is that I see no convincing way to link this to atmospheric temperatures as most will assume. Maximum effect can only penetrate a few inches at best, as snow is a great insulator.

The only viable mechanism is some form of undermining of the ice. In Greenland this has appeared to be a consequence of an unusual melt that allowed excess water into the base. In the Antarctic, we may be looking at excessive removal of ice at the toe of the glacier. Or we are simply looking at a gravitational release of simply too much ice.

In fact, I would suggest that the latter is to be preferred in the face of no evidence of the alternatives.

A lot has been written about glaciers and their possible link to the issue of Global Warming. It is believable that Greenland is responding to a decade of slightly warmer conditions. This is not so believable in the South. Unfortunately, this reminds us that other factors are very much in play, and caution is fully warranted here.

Keep in mind that a change in winds that somehow delivered moisture laden air to the top of a glacier would make it grow swiftly and have nothing to do with any theory. Also a buildup of decades can reach the point of instability and suddenly accelerate. Coincidental to any theories one may have. In fact the exceptional flow rates are just that and thus episodic.

Researchers have used NASA’s Ice, Cloud and Land Elevation Satellite (ICESat) to compose the most comprehensive picture of changing glaciers along the coast of the and Antarctic ice sheets.

The new elevation maps show that all latitudes of the ice sheet are affected by dynamic thinning - the loss of ice due to accelerated ice flow to the ocean.

The maps also show surprising, extensive thinning in , affecting the ice sheet far inland. The study, led by Hamish Pritchard of the British Antarctic Survey in , was published September 24 in Nature.

ICESat's precise laser altimetry instrument, launched in 2003, has provided a high-density web of elevation measurements repeated year after year across the and Antarctic ice sheets. With the dense coverage, the research team could distinguish which changes were caused by fast-flowing ice and which had other causes, such as melt.

The maps confirm that the profound ice sheet thinning of recent years stems from fast-flowing glaciers that empty into the sea.

This was particularly the case in West Antarctica, where the Glacier was found to be thinning between 2003 and 2007 by as much as 6 meters per year. In , fast-flowing glaciers were shown to thin by an average of nearly 0.9 meters per year.