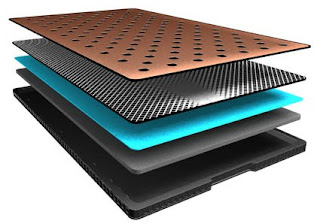 We have been writing up so much leading edge energy storage technology that it is almost a relief to find someone doing magic with a basic chemical design and getting it to perform like a thorough bred.

What is been suggested here is a very safe battery that can deliver an operating range of at least 100 to 150 miles. This is a great jump over present battery technology and takes the electric vehicle from awful to quite bearable. When a driver enters his vehicle in the morning, he is always at some risk of having to drive an extra errand that demands a range reserve. 30 miles normally cannot give you that but 100 miles will.

Thus a battery able to supply over a hundred miles clearly makes the city car feasible.

At worst, it is a transition technology or an alternate for long range systems when they are available and perhaps too expensive to be underutilized.

This technology may also be packable into small devices. Then it certainly will displace the lithium business.

MIT Technology Review reports that REvolt of Switzerland claims to have solved issues with rechargeable Zinc Air Batteries. Nonrechargeable zinc-air batteries have long been on the market. But making them rechargeable has been a challenge.

ReVolt Technology claims breakthrough achievements in developing a metal-air battery that overcomes all of the above barriers to deliver:

POWER: ReVolt’s new technology has a theoretical potential of up to 4 times the energy density of Lithium-Ion batteries at a comparable or lower production cost.

LIFETIME: Extended battery life due to stable reaction zone, low rates of dry-out and flooding, and no pressure build-up problems.

COMPACT SIZE: No need for bulky peripherals such as cooling fans or temperature control systems.

ReVolt says it has developed methods for controlling the shape of the zinc electrode (by using certain gelling and binding agents) and for managing the humidity within the cell. It has also tested a new air electrode that has a combination of carefully dispersed catalysts for improving the reduction of oxygen from the air during discharge and for boosting the production of oxygen during charging. Prototypes have operated well for over one hundred cycles, and the company's first products are expected to be useful for a couple of hundred cycles. McDougal hopes to increase this to between 300 and 500 cycles, which will make them useful for mobile phones and electric bicycles.

For electric vehicles, ReVolt is developing a novel battery structure that resembles that of a fuel cell. Its first batteries use two flat electrodes, which are comparable in size. In the new batteries, one electrode will be a liquid--a zinc slurry. The air electrodes will be in the form of tubes. To generate electricity, the zinc slurry, which is stored in one compartment in the battery, is pumped through the tubes where it's oxidized, forming zinc oxide and releasing electrons. The zinc oxide then accumulates in another compartment in the battery. During recharging, the zinc oxide flows back through the air electrode, where it releases the oxygen, forming zinc again.

In the company's planned vehicle battery, the amount of zinc slurry can be much greater than the amount of material in the air electrode, increasing energy density. Indeed, the system would be like a fuel-cell system or a conventional engine, in that the zinc slurry would essentially act as a fuel--pumping through the air electrode like the hydrogen in a fuel cell or the gasoline in a combustion engine. McDougal says the batteries could also last longer--from 2,000 to 10,000 cycles. And, if one part fails--such as the air electrode--it could be replaced, eliminating the need to buy a whole new battery.