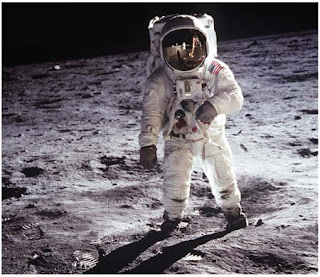 I have not posted on the flap over water on the moon. I was not getting the impression that there was much in the form of unbound water. However, this bit of jury rigged methodology is certainly useful on Mars and it may well turn out that the moon also has water available although I think it is deep.

It also appears that ample water does exist and will with this approach be quite recoverable. Thus establishing a lunar base may became much simpler.

In a way, this also confirms what we should have thought true from the beginning. That small molecules are ubiquous throughout space and are naturally accumulating on any body and subliming onto dust particles should have been no surprise.

Most advantageous is that it effectively allows us to operate almost on any available body in space.

I added an additional item that shows microwave energy is grabbed by iron, so i suspect that this bright idea will die a natural death.

October 7, 2009: NASA is figuring out how to make water from moondust. Sounds like magic?

"No magic--" says Ed Ethridge of NASA's Marshall Space Flight Center "-- just microwaves. We're showing how microwaves can extract water from moondust by heating it from the inside out."

The recent discovery of water on the Moon's surface has inspired researchers like Ethridge to rev up the development of technologies to capture it. Some of them believe the small amounts of frozen water mixed in lunar topsoil are just the tip of the iceberg.1 If so, Ethridge has figured out a way to retrieve it.

"We believe we can use microwave heating to cause the water ice in a lunar permafrost layer to sublimate – that is, turn into water vapor. The water vapor can be collected and then condensed into liquid water."

"Best of all, microwave extraction can be done on the spot. And it requires no excavation -- no heavy equipment for drilling into the hard-frozen lunar surface."

He calls his first mining experiment the "Moon in a bottle."

"We filled a bottle with simulated lunar permafrost [fake moondust containing water ice] and heated it in a microwave oven. The microwaves heated the simulant enough to extract water, even though the soil was as cold as it would be on the Moon."

At least 95 percent of the water added to the simulant was extracted (vaporized out of the soil) with 2 minutes of microwaving.

"And we were able to capture 99 percent of the vaporized water in our cold trap," says collaborator Bill Kaukler of the University of Alabama-Huntsville. "It works."

Then Ethridge and his team moved beyond the oven to beaming microwaves into the simulant – the way it would have to be done on the Moon. The beamed microwaves were absorbed into the soil and heated it sufficiently to extract water.

"This was an important demonstration. We had to make sure the microwaves wouldn't reflect off the surface," Ethridge explains. "It worked beautifully."

"We've asked for some genuine soil from the Apollo missions," says Ethridge. "We want to test the real thing and calculate how fast the water vapor will come out. That's an important piece of information."

"There are other things we need to know, like how much ice is at the poles, how deep it is, where it is -- is it only in the craters or is it everywhere?" This Friday morning, Oct. 9th, (the Lunar Crater Observation and Sensing Satellite) could answer some of the questions about moonwater when it plunges into crater Cabeus at the lunar south pole to unearth signs of H2O.

If ample water ice does exist on the Moon, how would lunar residents collect it?

"They'd have to beam microwaves into the soil and collect the water vapor in a cold trap," he explains. "We want to build a prototype water prospecting experiment to demonstrate the technique we’d like to see used in a lunar water mining facility."

He stops talking, looks up, and smiles. "I'd be willing to go up and set up the first Lunar Water Works -- if they'd let me."

Credits: Dr. William Kaukler of the University of Alabama-Huntsville was instrumental in the experimental and hardware setups for these experiments. Frank Hepburn of Marshall led the dielectric property measurements. Southern Research Institute is doing some measurements for team on the gas permeability of compacted lunar soil.

Footnote: 1Several days ago, NASA announced that the Moon Mineralogy Mapper, or M3, an instrument aboard the Indian Space Research Organization's Chandrayaan-1 spacecraft, discovered water molecules in the polar regions of the Moon. NASA's Cassini spacecraft and NASA's Epoxi spacecraft confirmed the find. Ethridge says: "The data [from the three aforementioned spacecraft] dealt with water detected from the top 1 or 2 mm of soil from regions like the Apollo sites, which are known to be "depleted" of any water (i.e., water produced from solar wind protons). But their data also shows much higher signals for water from the polar regions. The best locations for water ice are permanently shadowed craters near the poles. The water at the poles may be underneath a 1 cm depleted layer that overlies a higher concentration of water down to a meter deep. A few years ago, Lunar Prospector and Clementine produced data for hydrogen that translates to average concentrations estimated to be from 1 to 4.6 % water over large areas at the poles. Assuming an average 2 percent concentration, that translates to maybe 40 pounds -- about 5 gallons -- of water in a cubic meter of moon soil. (2 percent of a 1 ton is 40 pounds. A cubic meter of lunar soil is approximately 1 ton.)"

THIS IS AN ADDITIONAL ITEM OF INTEREST

Scientists and engineers figuring out how to return astronauts to the moon, set up habitats, and mine lunar soil to produce anything from building materials to rocket fuels have been scratching their heads over what to do about moondust. It's everywhere! The powdery grit gets into everything, jamming seals and abrading spacesuit fabric. It also readily picks up electrostatic charge, so it floats or levitates off the lunar surface and sticks to faceplates and camera lenses. It might even be toxic.

So what do you do with all this troublesome dust? Larry Taylor, Distinguished Professor of Planetary Sciences at the has an idea:

Don't try to get rid of it--melt it into something useful!

"I'm one of those weird people who like to stick things in ordinary kitchen microwave ovens to see what happens," confessed to several hundred scientists at the Lunar Exploration Advisory Group (LEAG) conference at NASA's last month.

At home in Tennessee, his most famous experiment involves a bar of Irish Spring soap, which quickly turns into "an abominable monster" when you hit the microwave's Start button. But that's not the one he told about at LEAG.

Apropos to the moon, he once put a small pile of lunar soil brought back by the Apollo astronauts into a microwave oven. And he found that it melted "lickety-split," he said, within 30 seconds at only 250 watts.

The reason has to do with its composition. The lunar regolith, or soil, is produced when micrometeorites plow into lunar rocks and sand at tens of kilometers per second, melting it into glass. The glass contains nanometer-scale beads of pure iron – so called "nanophase" iron. It is those tiny iron beads that so efficiently concentrate microwave energy that they "sinter" or fuse the loose soils into large clumps.

This observation has inspired to imagine all kinds of machinery for sending to the moon that could fuse lunar dust into useful solids.

"Picture a buggy pulled behind a rover that is outfitted with a set of magnetrons," that is, the same gizmo at the guts of a microwave oven. "With the right power and microwave frequency, an astronaut could drive along, sintering the soil as he goes, making continuous brick down half a meter deep--and then change the power settings to melt the top inch or two to make a glass road," he suggested.

"Or say that you want a radio telescope," he continued. "Find a round crater and run a little microwave 'lawnmower' up and down the crater's sides to sinter a smooth surface. Hang an antenna from the middle--voila, instant Arecibo!" he exclaimed, referring to the giant 305-meter-diameter radio telescope in Puerto Rico formed out of a natural circular valley.

Technical challenges remain. Sintering moondust in a microwave oven on Earth isn't the same as doing it on the airless moon. Researchers still need to work out details of a process to produce strong, uniformly sintered material in the harsh lunar environment.

But the idea has promise: Sintered rocket landing pads, roads, bricks for habitats, radiation shielding--useful products and dust abatement, all at once.