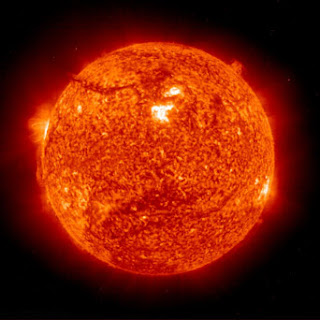 What we suddenly have is a primary magnetic cycle that is not correlating with the sunspot cycle in a timely manner. Thus linking it to a demise of the sunspot cycle is a reasonable proposition that will now be tested over the next few months and years.

The weakening of the magnetic field affects us in that many more cosmic rays enter the earth’s atmosphere. This has been linked to the creation of cloud cover and the possibility of alteration in the climate.

As I have already said, this theory is about to be subjected to a full stress test. And to be fair, this process of cooling will actually be quite protracted. At the moment, for example, we are still quite warm and are sitting above the long term averages. However, it needs to be a surprisingly miserable winter to be a convincing argument for a swift and direct mechanism

A team of astronomers at the National Solar Observatory in , have made an extraordinary announcement: Sunspots, which have been strangely rare for the past two years, may not be coming back anytime soon. Sunspots may disappear for a long time, and no one is quite sure what effects this could have on the earth.

Sunspots are powerful magnetic storms which appear on the surface of the sun. They are somehow generated by magnetic fields deep inside the sun which then rise up to the surface where we see them as dark blotches. Although they appear relatively small on the sun, many sunspots grow to the size of the earth, or even larger, before breaking up and vanishing again.

Individual sunspots will usually last for a few days or weeks before they disappear. However, sometimes the sun is covered with lots of spots, while at other times no spots are visible at all. This is because sometimes sunspots form rapidly, with a new sunspot appearing every few days, and during other times only a few sunspots may appear throughout an entire year.

Astronomers have long observed that sunspots vary in a cycle lasting about 11 years. For example, there were many sunspots during 1990, very few sunspots in 1996, then many sunspots again in 2001. The last sunspot cycle peaked in 2000-2002 and ended in 2006, and so astronomers have been waiting for the sunspots to return, but so far they have refused to come back. Throughout 2007, 2008, and now 2009, astronomers only detected a few rare sunspots here and there. 2007 and 2008 went down in history has being years with some of the fewest sunspots on record. During 2008, there were 265 days when no sunspots were visible at all, which is extraordinary because sunspots haven't been that rare since 1913.

A new analysis from a team at the National Solar Observatory suggests that we may be in more than just an unusually long dry spell between sunspot cycles. The team measured the strength of the magnetic fields in the center of sunspots using infrared light, in a set of data stretching from 1992 to the present. They found that even though the number of sunspots increased during the last peak 2000-2002, the magnetic field strength has been trending down steadily ever since 1992. If this trend continues, sunspots will vanish completely by 2015. This would not be unprecedented: In the 1600s, sunspots disappeared for a period of about 70 years, when there were no 11 year cycles and there were almost no sunspots observed at all. This trend indicates that we may be in for a long drought in sunspots.

Sunspots and solar magnetism have many effects on the earth. They cause solar flares and coronal mass ejections which can fry satellites in orbit and create beautiful displays of the northern lights. There is even some speculation that solar magnetism may affect the earth's climate, warming and cooling the earth at different times, although this remains very controversial. If sunspots were to disappear, astronomers really aren't sure exactly how this could affect the earth.

Using the past to predict the future doesn't always work out. Throughout the 20th century sunspot activity gradually increased before this more recent downtrend appeared. Astronomers do not understand all the details of how the solar cycle works, how these strong magnetic fields are generated deep inside the sun, and why they usually vary in an 11 year cycle. Solar magnetism remains one of the great unsolved mysteries of modern astronomy. But perhaps by studying and understand the current lack of sunspots, we may soon be able to unlock the mystery of the missing sunspots.

I am sending a news release regarding Earth's magnetic field that you can use on your blog. Please consider using it. You can find images on my website.

For many years researchers thought that a similar dynamo system was within the planet and that this internal dynamo generated the magnetic field. However, we know now that it is too hot inside the planet to produce and maintain a magnetic field there.

Earth’s inner and outer core simply cannot provide the fuel a dynamo system needs. If earth’s dynamo had to depend on energy from the planet for fuel, the entire planet would have been completely consumed many years ago.