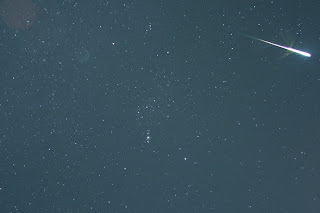 This is something to get up for if you have a good watching post to use. It will be there for Wednesday through Friday. The second link shows where to look, but just left of Orion is more than good enough.

October 19, 2009: The Orionid meteor shower peaks this week and it could be a very good show.

"Earth is passing through a stream of debris from Halley's Comet, the source of the Orionids," says Bill Cooke of NASA's Meteoroid Environment Office. "Flakes of comet dust hitting the atmosphere should give us dozens of meteors per hour."

The best time to look is before sunrise on Wednesday, Oct. 21st. That's when Earth encounters the densest part of Halley's debris stream. Observing is easy: Wake up a few hours before dawn, brew some hot chocolate, go outside and look up. No telescope is required to see Orionids shooting across the sky.

Orionids appear every year around this time when Earth orbits through an area of space littered with debris from the ancient comet. Normally, the shower produces 10 to 20 meteors per hour, a modest display. The past few years, however, have been much better than usual.

"Since 2006, the Orionids have been one of the best showers of the year, with counts of 60 or more meteors per hour," says Cooke.

According to Japanese meteor scientists Mikiya Sato and Jun-ichi Watanabe, 2006 marked Earth's first encounter with some very old debris. "We have found that the [elevated activity of 2006] was caused by dust trails ejected from 1P/Halley in 1266 BC, 1198 BC, and 911 BC," they wrote in the August 2007 edition of Publications of the Astronomical Society of Japan. In their paper "Origin of the 2006 Orionid Outburst," Sato and Watanabe used a computer to model the structure and evolution of Halley's many debris streams stretching back in time as far as 3400 years. The debris that hit Earth in 2006 was among the oldest they studied and was rich in large fireball-producing meteoroids.

Repeat encounters produced good displays in 2007 and 2008—and "the meteoroids are expected to approach Earth [again] in 2009," say Sato and Watanabe. They note that these old broad streams tend to produce equally broad showers, lasting several nights around the peak. So, if clouds interfere on the 21st, try again on the 22nd or 23rd.

Above: Orionid meteors stream from the elbow of Orion the Hunter. Because the shower's radiant point is close to the celestial equator, sky watchers in both hemispheres can enjoy the show. [larger map]

The phase of the Moon favors a good show. The Moon is almost new and completely absent from the pre-dawn sky at the time of the shower's peak. Bright moonlight will not be a problem.

Last but not least, the display will be framed by some of the prettiest stars and planets in the night sky. In addition to Orionids, you'll see brilliant Venus, red Mars, the dog star Sirius, and bright winter constellations such as Orion, Gemini and Taurus. Even if the shower is a dud, the rest of the sky is dynamite.

Set your alarm and enjoy the show.

Email ThisBlogThis!Share to TwitterShare to FacebookShare to Pinterest
Labels: Orion