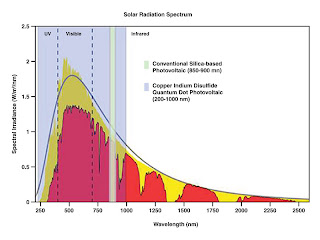 This is about as important as it can get. These guys have found a neat low energy method to produce small uniform nanoparticles. This means a way forward for a lot of appropriate materials that are prospective.

We have already seen the claims of EEStor. Those are completely dependent of producing a uniformly sized coated nanoparticle that is a capacitor.

Now a wide range of materials can be converted to nanoparticle size. Think what becomes possible in terms of chemical reactions.

Our objective here is to produce better solar cells and this will surely help.

Solar energy has been marking time until we can manufacture the three dimensional structure of the solar cell itself. Until then we have been able to achieve efficiencies of between 10% and 15% with the available methods. Shaping the surface structure and managing the particle size will allow significant improvement by allowing a wider range of the spectrum to be captured.

Anyway, this is pretty neat science and what it is all about.

Chemists at Idaho National Laboratory and Idaho State University have invented a way to manufacture highly precise, uniform nanoparticles to order. The technology, Precision Nanoparticles, has the potential to vastly improve the solar cell and further spur the growing nanotech revolution.

The researchers wanted to improve how raw materials are transformed into semiconducting nanoparticles. The industry's established method of doing this is relatively imprecise and energy-intensive, requiring temperatures around 300 degrees Celsius.

The team hit upon the idea of using "supercritical" carbon dioxide to streamline the reaction. Supercritical fluids are a bit like a mix between a gas and a liquid. They can diffuse through solids, for example, but also dissolve substances like a liquid does. Supercritical carbon dioxide has been used for years to decaffeinate coffee.

when Fox, Pak and Rodriguez introduced supercritical carbon dioxide into their reaction vessel, the only immediately noticeable result was a thick yellow goop.

"We thought it was a failed experiment," Fox says.

The new reaction could proceed at a much lower temperature — 65 degrees Celsius rather than 300 — it also promised to save a great deal of money and energy.

After tinkering with the reaction, Fox, Pak and Rodriguez figured out how to control nanoparticle size with unprecedented precision. They can now produce prescribed particles between 1 and 100 nanometers, hitting the mark every time with great accuracy. 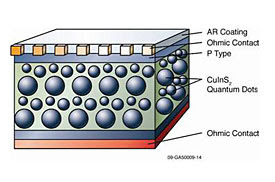 The chemists have manufactured nanoparticles of the semiconductor copper indium sulfide (identified here as “quantum dots”), a key component of advanced solar cells.

Precision Nanoparticles' most immediate applications come photovoltaics. The technology could also greatly advance ultracapacitor research. Ultracapacitors store electrical energy quickly and effectively, and they may someday replace batteries in electric cars and plug-in hybrids. At least one material, vanadium nitride, has much higher ultracapacitance in nano-form — but only if the nanoparticles are of strictly uniform size.

Researchers were able to duplicate and formalize the supercritical fluids-based technique, which can now produce affordable, uniform (+/- 0.2 nm) particles in a designated diameter and a wide range of sizes (less than 1 to 100 nm). The process does not require special handling such as cleanrooms, as is common with the materials currently used to manufacture solar cells and other products. This reduces capital and operating costs associated with deploying solar cells. The process is also cost effective by an order of magnitude compared to other methods. A gram of copper indium disulfide nanoparticles, for example, which is difficult to produce at high quality and high quantity, can be made for just dollars.