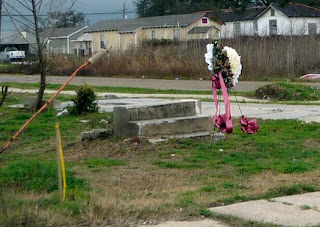 The vulnerability of was been openly aired in the months leading up to Katrina. I even was aware of it. This was largely because folks such as Dr Van Heerdon did speak out.

The handling of the disaster appeared to be a SNAFU from beginning to end. Yes has critical information first, but no one obviously understood that the information was not getting to the battlefield. It was a rookie mistake, but when you have allowed political animals into the kitchen, that is exactly what you have.

The disaster systems put together by the government under FEMA got their baptism and were found flawed. This was hardly surprising.

The levees where a disaster waiting to happen. A good way to have repaired the situation would have been to build a second line of defense one or two blocks in from the first levee. This would also be a proper levee able to hold water. One would also build cross levees between the two every several blocks or so. Then over the years, I would encourage raising the ground level in each cell. This should be practice for areas below sea level at least were the danger is most obvious.

The advantage of such a system is that you can be cheap in terms of a given stretch of levee because failure will only flood the affected cell of several blocks. Katrina showed that a breach takes a long time and dislodges a vulnerable section. And there is always some level of storm intensity combined with some weakness that will cause failure. The second line solves that.

Remember that Katrina only destroyed perhaps a few hundred feet of dike or so out of miles of levees. The rest held up as engineered and designed however inadequately.

There's another floater. Four years on, there's another victim face down in the waters of Hurricane Katrina, Dr. Ivor van Heerden.

I don't get to use the word "heroic" very often. Van Heerden is heroic. The Deputy Director of the , it was van Heerden who told me, on camera, something so horrible, so frightening, that, if it weren't for his international stature, it would have been hard to believe:

"By midnight on Monday the White House knew. Monday night I was at the state and nobody was aware that the levees had breeched. Nobody."

On the night of August 29, 2005, van Heerden was shut in at the state emergency center in , providing technical advice to the rescue effort. As Hurricane Katrina came ashore, van Heerden and the state police there were high-fiving it: Katrina missed the city of , turning east.

What they did not know was that the levees had cracked. For crucial hours, the White House knew, but withheld the information that the levees of had broken and that the city was about to drown. Bush's boys did not notify the State of the flood to come which would have allowed police to launch an emergency hunt for the thousands that remained stranded.

"Fifteen hundred people drowned. That's the bottom line," said von Heerden. He shouldn't have told me that. The professor was already in trouble for saying, publicly, that the levees around were no good, too short, by 18″. They couldn't stand up to a storm like Katrina. He said it months before Katrina hit -- in a call to the White House, and later in the press.

So, even before Katrina, even before our interview, the professor was in hot water. Van Heerden was told by University officials that his complaints jeopardized funding from the Bush Administration. They tried to gag him. He didn't care: he ripped off the gag and spoke out.

It didn't matter to Bush, to the State, to the University, that van Heerden was right -- devastatingly right. Exactly as van Heerden predicted, the levees could not stand up to the storm surge.

In 2006, I met van Heerden in his office at the University's hurricane center; a cubby filled with charts of the city under water. He's a soft-spoken, even-tempered man, given to understatement and academic reserve. But his words were hand grenades: the Bush White House did nothing about the levees, despite warning after warning.

Why? A hurricane is an Act of God. But a levee failure is an Act of Bush -- of the federal government. Under the Flood Control Act of 1928, once the levees break, it's 's responsibility to save lives -- and to compensate the victims for lost homes and lost loved ones.

By telling me this, the professor had to know he was putting his job on the line. This week marks the fourth anniversary of the drowning of .

Shakoor Aljuwani of the Rebuilding Lives Coalition reminds me it is also the fourth year of exile for more than half of the low-income Black residents who once lived in the . In the Lower Ninth Ward, 81% have yet to return.

And it marks the end of Dr. van Heerden's career at LSU. They got him. Once the network cameras were turned away from , as and Anderson Cooper shifted attention to Brad and Angelina and other news, the University put an end to Dr. van Heerden. "In 2006 they started the nonsense -- they stopped me from teaching. They tried last year to get faculty to vote me out."

His contract was not renewed; he was forced out too, dumped along with the chief of the who led the academics who supported van Heerden's research. The Man Who Was Right was fired.

I did not seek out professor van Heerden about Bush's deadly silence. Rather, I'd come to LSU to ask him about a strange little company, "Innovative Emergency Management," a politically well-connected firm that, a year before the hurricane, had finagled a contract to plan the evacuation of New Orleans.

Innovative Emergency Management knew a lot about political contributions, but seemed to have zero experience in hurricane response planning. In fact, their "plan" for called for evacuating the city by automobile. When Katrina hit, 127,000 wheel-less folk were left to float out.

And van Heerden knew all about it. Well before the hurricane, I discovered, he'd pointed out flaws in the "Innovative" plan -- and was threatened for the revelation by a state official. The same official later joined the payroll of Innovative Emergency Management.

When I asked the company, at their office, for a copy of the plan, they body-blocked our Democracy Now! camerawoman and called the cops.

Not everyone shared the harsh fate of van Heerden. Just this month, Innovative Emergency Management, the firm with the drive-for-your-life plan, was handed a fat contract by the State of to draft -- you guessed it -- a hurricane evacuation plan for .

The City That Care Forgot

After the flood, I filmed the uplifting story of Common Ground, the commune of Katrina survivors who, under the leadership of the community organizer Malik Rahim, rebuilt a shattered hulk of a building with their own sweat and donated materials. They housed 350 displaced families.

Since I broadcast that film in 2006, Rahim and the tenants were evicted by speculators who bought the building. Just before Christmas, elderly residents were carried out and dumped in the street, literally, by marshals. The speculators paid the families who build their new edifice not one dime.

We also filmed the story of Patricia Thomas, a woman fighting to return to her home in the beautiful Lafitte public housing project. Speculators have long lusted for this property on the edge of the French Quarter.

And now the speculators have it. Patricia's home, unscathed by Katrina, was nevertheless bulldozed. As Rahim puts it, "They wanted them poor niggers out of there and they ain't had no intention to allow it to be reopened to no poor niggers." Their plan succeeded. Patricia, homeless, died last year.

This Friday, take a moment to remember a courageous professor, an indefatigable activist and the refugee families who once lived in what was once called, "The City That Care Forgot." Now, in 2009, you could call it the city that everyone forgot.

© Copyright 2009 by the Institute for Southern Studies

Greg Palast is the author of the New York Times bestsellers The Best Democracy Money Can Buy and Armed Madhouse. For one week only, the International Humanities Center is offering, free of charge, a download of Greg Palast's investigative report for Democracy Now!, "Big Easy to Big Empty - the untold story of how the White House drowned New Orleans" at www.GregPalast.com. Download the film or make a donation to support these investigations and get a copy signed by Palast at www.gregpalast.com/bigeasy.