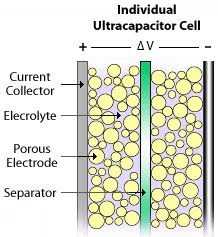 What I find most welcome about this item is that it represents direct competition for EEStor. While some find the claims made hard to swallow, that is really not the issue.

One can make an ultracapacitor out of ball bearing sized capacitors if one wished it. It simply would store way too little energy. Reducing the size of the little balls increases contained power density as an inverse power ratio. Thus cutting the size in half should increase power by eight. I am sure that this is not totally complete but I would be very surprised to not find a cubed variable in the relevant equation’s denominator.

Thus the secret to making useful ultracapacitors is to manufacture the right moon dust. EEStor has convincingly done just that as confirmed by independent lab work.

Their optimism suggests that they have a good protocol for making devices from this moon dust. After all, they have had years to figure it out. The challenge is and was to produce the sizing needed to achieve performance.

The drawing here is showing the same thing.

This means that others are now fully in the hunt to produce these devices and that surely means their commercialization is close.

Nesscap Inc., a South Korean-based ultracapacitor manufacturing and power storage solutions company, announced today that it has closed a bridge financing round in the amount of $9 million.

Which is not that special.

Experimental electric double-layer capacitors from the MIT LEES project have demonstrated densities of 30 W·h/kg and appear to be scalable to 60 W·h/kg in the short term, while EEStor claims their examples will offer capacities about 400 W·h/kg. For comparison, a conventional lead-acid battery is typically 30 to 40 W·h/kg and modern lithium-ion batteries are about 160 W·h/kg.

Earth2tech.com reports Nesscap, founded back in 2001, says its ultracapacitors can deliver 10 times more power and last 10 times longer than standard batteries, and can store more energy than other commercially available ultracapacitors. The startup is targeting energy storage for consumer electronics, renewable energy on the power grid, and vehicles and sells ultracapacitor in both cells and modules that vary in size and power.

Do not see where Nesscap is claiming new products with a stated figure for Wh/kg.

Ultracapacitors tested by UC Davis in 2009

Email ThisBlogThis!Share to TwitterShare to FacebookShare to Pinterest
Labels: EEStor