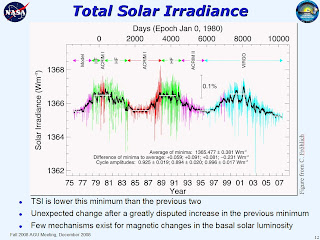 When I went and dug up information of the sun’s variability a couple of years ago, I came across figures that showed minuscule changes. This article shows us that that was misleading. I get the impression that the folks who care about these things are possibly still collecting relevant data. This is possible because the important parts are those the atmosphere absorbs and we do not see at all.

The importance of all this is that the variability of the extreme ultraviolet (EUV) is over a range of six percent of the total EUV. On top of that, it is absorbed by the atmosphere or less likely reflected. Absorption means that this will heat that part of the atmosphere that does the absorbing. That heat must be accounted for in our global heat engine equation.

After observing the field for a couple of years, I am not too trusting these days. A six percent 11 year variation in a single source of heat is clearly and convincingly prospective as a climate driver. If not, it is because the output in that range is too low. It also reacts mainly with the outer reaches of our atmosphere but that may a too conservative opinion. After all, how could we properly tell?

In space we have satellites to measure the total flux of any wave band.. We can do the same on the ground and near ground. In between our coverage is much weaker to the point of been nearly blind.

The point is that this is a prospective heat driver that has not been respected for whatever reason. A couple of unrecognized heat transfer mechanisms and we are in business. The variation itself is not trivial. It is linked to the sunspot cycle rather directly. The increase in radiation is significant and is much different than variation over the other bands (as far as I can tell)

Now understand that the heat loss during the latter stages is been drawn from a much lesser atmospheric volume. This implies that it will get a lot colder.

What I am saying is that putting a heat cap on the upper atmosphere is possibly sufficient to explain the warming effect of the sunspot cycle. The failure of the cycle allows a progressive chilling of the climate. Two or three failed cycles in a row and we have a little ice age to contend with.

It will not produce a real ice age, but it will certainly curtail our recent livable winters. I had recognized for some time that we needed something that leveraged the sunspot cycle to properly explain the data. The apparent output of the sun lacked variability and appeared to do it all. This effect modifies heat loss.

October 27, 2009: Every 11 years, the sun undergoes a furious upheaval. Dark sunspots burst forth from beneath the sun's surface. Explosions as powerful as a billion atomic bombs spark intense flares of high-energy radiation. Clouds of gas big enough to swallow planets break away from the sun and billow into space. It's a flamboyant display of stellar power.

So why can't we see any of it?

Almost none of the drama of Solar Maximum is visible to the human eye. Look at the sun in the noontime sky and—ho-hum—it's the same old bland ball of bright light.

"The problem is, human eyes are tuned to the wrong wavelength," explains Tom Woods, a solar physicist at the of in . "If you want to get a good look at solar activity, you need to look in the EUV."

EUV is short for "extreme ultraviolet," a high-energy form of ultraviolet radiation with wavelengths between 1 and 120 nanometers. EUV photons are much more energetic and dangerous than the ordinary UV rays that cause sunburns. Fortunately for humans, Earth's atmosphere blocks solar EUV; otherwise a day at the beach could be fatal.

When the sun is active, intense solar EUV emissions can rise and fall by factors of thousands in just a matter of minutes. These surges heat Earth's upper atmosphere, puffing it up and increasing the drag on satellites. EUV photons also break apart atoms and molecules, creating a layer of ions in the upper atmosphere that can severely disturb radio signals. To monitor these energetic photons, NASA is going to launch a sensor named "EVE," short for EUV Variability Experiment, onboard the Solar Dynamics Observatory as early as this winter.

Although EVE is designed to study solar activity, its first order of business is to study solar inactivity. SDO is going to launch during the deepest solar minimum in almost 100 years. Sunspots, flares and CMEs are at low ebb. That's okay with Woods. He considers solar minimum just as interesting as solar maximum.

"Solar minimum is a quiet time when we can establish a baseline for evaluating long-term trends," he explains. "All stars are variable at some level, and the sun is no exception. We want to compare the sun's brightness now to its brightness during previous minima and ask ourselves, is the sun getting brighter or dimmer?"

Lately, the answer seems to be dimmer. Measurements by a variety of spacecraft indicate a 12-year lessening of the sun's "irradiance" by about 0.02% at visible wavelengths and 6% at EUV wavelengths. These results, which compare the solar minimum of 2008-09 to the previous minimum of 1996, are still very preliminary. EVE will improve confidence in the trend by pinning down the EUV spectrum with unprecedented accuracy.

Above: Space-age measurements of the total solar irradiance or "TSI". TSI is the sun's brightness summed across all the wavelengths of the electromagnetic spectrum--visible light and EUV included. TSI goes up and down with the 11 year solar cycle. Credit: C. Fröhlich.

The sun's intrinsic variability and its potential for future changes are not fully understood—hence the need for EVE. "The EUV portion of the sun's spectrum is what changes most during a solar cycle," says Woods, "and that is the part of the spectrum we will be observing."

Woods gazes out his office window at the sun. It looks the same as usual. EVE, he knows, will have a different story to tell.