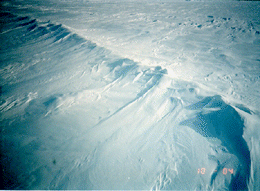 As stated, during the last five years, the areal extent has clocked in with the five lowest readings. While this is all happening, it has also been getting thinner. In fact, this report tells us we lost 2.2 feet of thickness over the past four years or we are losing thickness at the rate of over five inches per year. The ice itself is spreading itself out thinner to sustain areal coverage thanks to cooperating winds.

Critically, the supply of ice over two years old is now at a record low of 19 % of total. On the good news side, we have a somewhat larger carry over into next year, but that may actually be illusionary.

The combination of conditions experienced in 2007 will rip this pack up terribly because it will be picking up where 2007 left off with a foot less ice. We have recovered no net ice mass since then and the prospects for such recovery must be low. It will take several years of ice growth before this changes. We have had the opposite for possibly two decades and all evidence until now has been for continuation. It barely slowed down this year though I have some reason to anticipate a really good ice forming year this year.

Of course the overdue sunspot cycle might just kick in and cloud cover will thus reduce and a resultant warm arctic summer will tear up the ice.

Otherwise, I simply do not see any other reason to think that conditions are anything other than stable and we will continue to lose five inches of ice per year. This really means that collapse is imminent over the next three years and should become more visible this coming year unless we form an extra several inches of ice this winter.

As posted earlier, we will stress test the cosmic ray hypothesis this winter and maybe it will shape up convincingly. I am not nearly so convinced because such a signature as the related sunspot cycle is not convincingly showing up in the Antarctic record I just posted on. Thus I am definitely in a wait and see position there.

At the end of the Arctic summer, more ice cover remained this year than during the previous record-setting low years of 2007 and 2008. However, sea ice has not recovered to previous levels. September sea ice extent was the third lowest since the start of satellite records in 1979, and the past five years have seen the five lowest ice extents in the satellite record.

NSIDC Director and Senior Scientist Mark Serreze said, "It's nice to see a little recovery over the past couple years, but there's no reason to think that we're headed back to conditions seen back in the 1970s. We still expect to see ice-free summers sometime in the next few decades."

Sea surface temperatures in the Arctic this season remained higher than normal, but slightly lower than the past two years, according to data from Mike Steele at the University of Washington in Seattle. The cooler conditions, which resulted largely from cloudy skies during late summer, slowed ice loss compared to the past two years. In addition, atmospheric patterns in August and September helped to spread out the ice pack, keeping extent higher.

The ice cover remained thin, leaving the ice cover vulnerable to melt in coming summers. Scientists use satellites to measure ice age, a proxy for ice thickness. This year, younger (less than one year old), thinner ice, which is more vulnerable to melt, accounted for 49 percent of the ice cover at the end of summer. Second-year ice made up 32 percent, compared to 21 percent in 2007 and 9 percent in 2008. Only 19 percent of the ice cover was over 2 years old, the least in the satellite record and far below the 1981–2000 average of 52 percent. Earlier this summer, NASA researcher Ron Kwok and colleagues from the University of Washington in Seattle published satellite data showing that ice thickness declined by 0.68 meters (2.2 feet) between 2004 and 2008.

NSIDC Scientist Walt Meier said, "We've preserved a fair amount of first-year ice and second-year ice after this summer compared to the past couple of years. If this ice remains in the Arctic through the winter, it will thicken, which gives some hope of stabilizing the ice cover over the next few years. However, the ice is still much younger and thinner than it was in the 1980s, leaving it vulnerable to melt during the summer."

Arctic sea ice follows an annual cycle of melting and refreezing, melting through the warm summer months and refreezing in the winter. Sea ice reflects sunlight, keeping the Arctic region cool and moderating global climate. While Arctic sea ice extent varies from year to year because of changeable atmospheric conditions, ice extent has shown a dramatic overall decline over the past thirty years. During this time, ice extent has declined at a rate of 11.2 percent per decade during September (relative to the 1979 to 2000 average), and about 3 percent per decade in the winter months.

NSIDC Lead Scientist Ted Scambos said, "A lot of people are going to look at that graph of ice extent and think that we've turned the corner on climate change. But the underlying conditions are still very worrisome."

To read the full press release and view figures, see

Email ThisBlogThis!Share to TwitterShare to FacebookShare to Pinterest
Labels: NSIDC